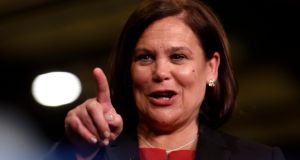 As counting continued on Sunday in the general election, Sinn Féin leader Mary Lou McDonald said she had been in touch with the Greens, Social Democrats and People Before Profit to arrange government formation talks.

Speaking at the RDS count centre on Sunday, Ms McDonald said she wanted to explore whether such a new government would be possible.

Sinn Féin looks poised to win a historic number of seats in the 33rd Dáil as it benefits from a dramatic surge in support from voters in the election. An Ipsos MRBI exit poll for The Irish Times, RTÉ, TG4 and UCD published on Saturday put the party’s share of the vote at 22.3 per cent, almost tied with Fine Gael.

Ms McDonald said it was “not sustainable” for either Fine Gael leader Leo Varadkar or Fianna Fáil leader Micheál Martin “to say they will not speak to us, representatives of such a sizeable section of the Irish electorate”.

She said she was not shocked by the countrywide surge in support for her party and acknowledged that the party should have fielded more candidates.

“It is a big statement of change. This is no longer a two-party system. People want a different type of government.

“This election was all about change. Sinn Féin went to the people and we convinced them in large numbers that we are the alternative, we are the vehicle for change. We asked people to give us a chance to deliver the platform we have set out. That platform is about solving the housing crisis, it is about getting to grips with the crisis in our health services, it is about giving families and workers a break so that ordinary people begin to experience this economic recovery that we have heard so much about.”

She said she would “not do another five years of the housing crisis”.

Meanwhile, former Sinn Féin leader Gerry Adams said that Irish voters had registered a “step change” in politics. He said that his party would prefer a government which did not include Fianna Fáil or Fine Gael, but later acknowledged that that “might not be possible”.

Mr Adams, speaking at the Louth count centre in Dundalk, said he hoped Ms McDonald “would be able to engage with the other parties” to form a government.

The former leader expressed frustration that Fianna Fáil and Fine Gael had refused to countenance a coalition with Sinn Féin.

Mr Martin had “said he won’t even talk to us, which is a hark back to what used to happen in the North decades ago”, said Mr Adams.

Mr Adams said he felt that it would be “very difficult to see” how Sinn Féin could put together a programme for government with “conservative parties” like Fine Gael and Fianna Fáil on the basis that Sinn Féin “campaigned for change and we were given a mandate for change”.

He said that he had been confident Sinn Féin would hold its seats in the Dáil but had not foreseen the extent of its success this year. Mr Adams also likened his party’s success to that in the election to the first Dáil in 1918.

Speaking after his re-election in Dublin Mid-West, Sinn Féin housing spokesman Eoin Ó Broin said housing was one of the biggest issues on doorsteps around the country and was a major contributor to the success of his party in the election.

“It did not matter if it was a council estate or a settled residential area. Everybody was talking about it. Housing was, if not the major issue, one of the top two major issues in the campaign.”

Sinn Féin’s David Cullinane, who topped the poll in Waterford, spoke during the count on entering government, saying: “We have the personnel, we have the vision, we have the energy, and we want to be in government. And people know that.”

Mr Cullinane said that “the only way Sinn Féin will end up in opposition is if Fianna Fáil and Fine Gael contrive to keep us out”.

If the two parties won’t talk to Sinn Féin, then they “have to talk to each other”, he added.

“This notion of a second election in a couple of weeks [if government formation is not possible] won’t wash with the electorate,” he said.

Responding to his party’s projected performance, he said: “We could sense it over the last couple of weeks that it was going to come back with a very, very high vote, but I don’t think anybody would have anticipated how high the vote is.”

Sinn Féin candidate Martin Kenny, who is set to top the poll in Sligo-Leitrim, also said it would be “extremely arrogant” for Fianna Fáil and Fine Gael to refuse to talk to his party .

“The people have spoken, they have talked and they have made it very clear that they want change and that Sinn Féin represents the best part of that change that they want,” he said.

Asked whether those who voted for change might not want Sinn Féin to go into coalition with Fianna Fáil or Fine Gael, he said: “Our supporters would not like us to prop up the type of government that we have seen with Fine Gael and Fianna Fáil in the past. I think our supporters would be quite comfortable for us to set the agenda as to what type of government it would be.”

The outgoing TD added that he was delighted with his vote, which some had predicted might be affected by his stand in support of asylum seekers in Ballinamore. Additional reporting: – PA