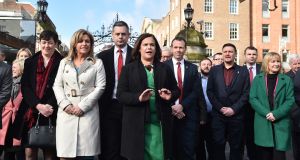 Sinn Féin leader Mary Lou McDonald speaks to the media as she arrives for the convening of the 33rd Dáil in Dublin. Photograph: Charles McQuillan/Getty Images

Change was the buzzword when the 33rd Dáil met for the first time on Thursday, and as the new TDs took their seats before noon, it was apparent just how different this Dáil is from its predecessors.

The massed ranks of the Sinn Féin cohort were the most obvious change, many of them young, many of them women, some of them still looking – if the truth be told – a bit surprised to be there.

Mary Lou McDonald became the first serious Sinn Féin candidate for the post of taoiseach and won the highest number of votes for the position in the Dáil – a historic moment for her party – attracting the support of not just her own TDs but those of the far left (at least for now) and other left-wing Deputies.

Whatever happens with government formation, McDonald and her party are now at the very centre of Irish politics. That will change Irish politics, but it will also change Sinn Féin, too. Already party bosses are discovering that the scrutiny that comes with power can be uncomfortable, as they squirm a little in the anti-Semitism controversy over tweets by one of the party’s successful candidates, Réada Cronin.

But the change is hardly limited to Sinn Féin. Sitting beside them were the Greens, with their six-fold increase since the last election, all those new Social Democrats, Labour and Independents of all stripes – all squeezing Fianna Fáil and Fine Gael, who have always ruled the roost here without question, into diminished spaces on the Dáil benches. The two old parties still face one another across the floor of the chamber as principal rivals: but for how much longer?

That question, along with other important ones, was not answered in the Dáil on Thursday. The biggest question was: what exactly does change mean? Second up: who will be in a position to implement it in government?

The speeches of nomination – empty of substance, full of well-meaning platitudes, mostly – gave little indication of anything, other than it is abundantly clear that change means different things to different people.

Nor was there any sign in the Dáil that a coalition agreement between two of the big three, with support from the Greens or another small party, is anywhere close. They have hardly got beyond the talks about talks phase.

The electorate gave their instructions to the political leaders at the ballot box a fortnight ago. Little progress has been made since.

In this complex and fragmented Dáil, it will clearly take time to work out if a government can be put together on a basis that is coherent, and if it can command a majority in the House. Thursday’s prolonged proceedings made it clear that will not be a speedy process.