‘I’ve a nine-day old baby, so becoming an MEP is not something I was expecting’ 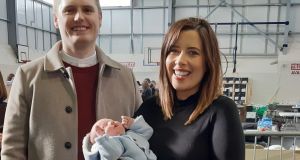 As current MEP Matt Carthy looks set to take a seat in Cavan Monaghan and his replacements Darren O’Rourke, Mairéad Farrell and Pauline Tully ready to take seats in Meath East, Galway West and Cavan/Monaghan respectively – the Meath teacher is next on the list for the top job.

The new mum appeared at the Trim GAA club count centre with her newborn Iarla Seosamh – named after party stalwart Joe Reilly, who died in June 2018.

Sinn Féin widely deems the former Meath councillor Reilly as responsible for building the party in Meath and raising the number of councillors in the county from one to a historic eight in the 2014 local elections.

“Gosh, my hormones are everywhere as it is and now I’m facing the prospect of being MEP,” said Ms Ní Shluáin.

She said: “It’s an amazing day for Sinn Féin in both Meath West and Meath East where it’s looking like Johnny Guirke and Darren O’Rourke will top the polls.

“I’ve a nine-day old baby, so becoming an MEP is not something I was expecting but it is an exciting prospect.

“Matt, Darren, Mairéad and Pauline all look likely to take seats today in their constituencies and I’m next on the substitute list.

“It’s a conversation that I will possibly have to have with family and the party but that’s for another day.

“Today is Sinn Féin’s day and today in Meath, we remember Joe Reilly who was instrumental in the party here. He was such an important figure to us that I even named the baby Iarla Seosamh, after him.”