McElduff resigns because of ‘deep and unnecessary hurt’ he caused 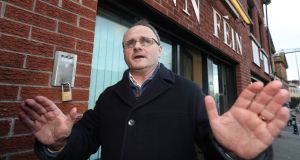 Sinn Féin’s Barry McElduff has resigned as West Tyrone MP over a controversial video he posted on Twitter on the anniversary of the Kingsmill massacre.

Mr McElduff said in a statement the “deep and unnecessary hurt” the video caused the families of the victims was his biggest greatest regret.

The West Tyrone MP has been under increasing pressure to resign after, on the 42nd anniversary of the atrocity, he posted a short clip of himself in a shop balancing a loaf of Kingsmill bread on his head. This was interpreted as an insult to victims of the Kingsmill massacre.

On January 5th, 1976 the IRA stopped a minibus at Kingsmill in Co Armagh. Ten Protestant workmen were shot dead and another, Alan Black, was seriously injured. The Catholic worker among the group was spared. The murders were in response to another bout of sectarian killings the previous day when the Ulster Volunteer Force shot dead six Catholics in two separate incidents. Three members of the Reavey family and three members of the O’Dowd family were murdered in those attacks.

Mr McElduff’s resignation comes after an emotional interview with Mr Black, the sole survivor of the massacre, was broadcast on RTÉ on Sunday.

“It is with great sadness that, after more than 30 years as an active Sinn Féin member and public representative I am tendering my resignation as MP for West Tyrone,” Mr McEldfuff said.

“The reason I am doing so is because of the consequences of the Twitter video which has caused such controversy over the last week.

“But the deep and unnecessary hurt this video caused the families of the victims of Kingsmill is my greatest regret.

“I again offer my profound apology to those families and to the wider victims community.

Mr McElduff’s party colleague John O’Dowd was praised by unionists for an interview he gave last week condemning the massacre and describing it as shameful. “Kingsmill was wrong, unjustifiable and sectarian. It should never have happened,” Mr McElduff continued in his resignation statement.

“There was no intended reference to Kingsmill in my tweet. But I do accept that there are many people who do not believe this to be the case. I accept also that this view of what happened is deeply damaging to the reconciliation process that is so important to consolidating the peace process and to healing the pain and hurt of the past.

“I cannot undo the pain caused but I know that my continuing role as MP for West Tyrone will compound that sense of hurt and impede any reconciliation process.

“I wish to wholeheartedly thank my family and friends for their steadfast personal support during this difficult time, and the people of West Tyrone whom I have had the privilege to serve as their public representative for over 20 years. I have a deep grá for my native county and its people.

“I am an Irish republican and believe whole heartedly in the reunification of our country and an agreed Ireland in which we heal the wounds of the past together.

“Reconciliation is essential, but that message is not being heard at this time.

“I do not wish to be a barrier to reconciliation and healing and in that spirit I again offer my sincere apologies to the survivors and families of those murdered at Kingsmill.”

Sinn Féin northern leader Michelle O’Neill said Mr McElduff informed her of his intention to resign on Sunday “as a consequence of the unintended hurt caused to the Kingsmill victims and their loved ones by his recent social media tweet”.

“Barry recognises that this controversy and his continuing role in public office is compounding the distress to the victims of Kingsmill, and again offers his profound apology to those families and to the wider victims community,” she said.

“He has said that he does not want to be a barrier to reconciliation and I respect that decision.

“Barry has served Sinn Féin and been a formidable champion for the people of West Tyrone at local government, Assembly and Westminster level over the past 20 years and has done so with great commitment, energy and determination. “For this I want to personally thank Barry and his family, Paula, Niamh, Blannid and Patrick.

“Over the coming weeks Sinn Féin will focus our full efforts on the restoration of the power-sharing institutions on the basis of equality, integrity and respect and fulfil the mandate we received from the electorate in two successive elections last year.”

The earlier decision by Sinn Féin to impose a three-month suspension on Mr McElduff was condemned by unionist politicians.

He was called to a meeting in Belfast last Monday afternoon with the Sinn Féin leadership, including Ms O’Neill. There was speculation beforehand he might have been forced to resign. This was fuelled by comments earlier on Monday by Sinn Féin chairman Declan Kearney who said Mr McElduff’s action was “indefensible”.

Ms O’Neill said that at their meeting she “made it clear to Barry that his tweet was ill-judged, indefensible and caused hurt and pain to the victims of Kingsmill, that it falls far short of the standard expected of Sinn Féin representatives and our members.