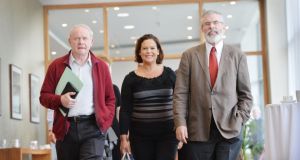 Sinn Féin is ready to go into government but not at any cost, the party’s deputy leader said yesterday.

As TDs and Senators gathered for the party’s think-in in Co Meath, Mary Lou McDonald said the party would campaign in the next general election on the basis that it would abolish water charges and the property tax if in power.

She said these were red line issues for Sinn Féin when entering any possible coalition government in the future.

Finance spokesman Pearse Doherty said the party would use its pre-budget submission to outline alternative sources of revenue to replace the money that would be lost by the abolition of property and water charges. He said scrapping the water conservation grant would raise €160 million.

Sinn Féin would also introduce a third rate of income tax for those earning more than €100,000, a 3 per cent betting tax and a second home tax at a rate of €400.

“Sinn Féin is determined to abolish water charges and the family home tax,” he said. “These are red line issues for the party that would not be up for negotiation in any potential programme for government. These are two new unjust and unfair taxes that target those that have the least to spare.”

The party’s TDs, Senators, MLAs and MEPs gathered in Co Meath yesterday ahead of the new Dáil term.

The gathering was largely overshadowed by unfolding events in the North. Deputy First Minister Martin McGuinness briefed his colleagues on the latest developments yesterday morning.

Sinn Féin is continuing to gain support in the opinion polls, with a recent one showing it at 24 per cent.

Leader Gerry Adams said his party were ready to contest an election and urged Taoiseach Enda Kenny to go to the people as soon as possible. He said the country needed a government which was not led by Fine Gael or Fianna Fáil.

“These two conservative parties have dominated politics here since partition,” Mr Adams said. “Citizens need a progressive government which will pursue viable policies based on equality not on austerity, based on rights not on privilege and which will govern in the interests of citizens as opposed to the interests of the elite.”

The Louth TD claimed Fine Gael, Fianna Fáil and Labour were scared of the mass momentum his party was building.

“When the Taoiseach has the guts to call an election, Sinn Féin will contest every constituency. We will fight every contest to win,” he said.

“We will give citizens the opportunity to choose the principled, equality-based politics of republicanism as opposed to the old politics of strokes and privilege. When the Taoiseach assumed office, he promised a ‘democratic revolution’ but delivered unaccountable government and stroke politics at its worst.”

Mr Adams also claimed Mr Kenny forced the retirement of former Garda commissioner Martin Callinan. He said it had been time for Mr Callinan to step down but Mr Kenny’s role in his retirement was unjust.