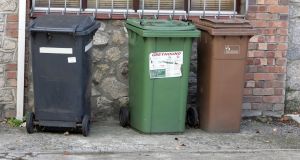 Many TDs have expressed anger at the Government’s move to remove the flat fee waste collection system in favour of pay-by-weight or pay-by-lift system. Photograph: Alan Betson

Sinn Féin has published a Private Members Bill objecting to the “new punitive bin charges regime” and is calling on the Government to immediately withdraw the proposed changes to waste permits. The Bill will be taken to Dáil next Wednesday.

Fianna Fáil is also set to table a Dáil motion calling for regulation of the waste industry and for the new system to be frozen until consumers have a clear understanding of the cost of these changes.

Both parties have warned that people with medical conditions and disabilities, large families and low income households will bear the financial brunt of the new system.

Many TDs have expressed anger at the Government’s move to remove the flat fee waste collection system in favour of pay-by-weight or pay-by-lift system which could see some households pay higher bin charges. Under the new system there will be no minimum charge per kilogram of waste and operators will be free to set their own prices. Flat fees will be phased out over a period of time.

Adults with long-term incontinence problems will receive an annual payment of €75 from the State to help with disposal costs but the Department for the Environment has said are no plans to introduce a cap on bin charges.

Sinn Féin environment spokesman Brian Stanley accused Minister for Communications Denis Naughten of introducing the charges towards the end of the Dáil term in an attempt to “bypass the scrutiny of the Dáil” and underlined that household waste was a basic public service that is “essential for healthy living and maintaining a safe and clean environment”.

“We need to have drastic reduction in the volumes of waste produced by industry and at wholesale level. This should not be passed onto households to dispose of and these changes introduced do not in any way prevent waste being produced in the first place. This needs to be addressed along with addressing the charging of low income households.”

Mr Stanley accused Fianna Fáil, who are also calling for regulation of the waste industry, of putting forward “a weaker motion that lets the Government off the hook and does not deal with the issue in a substantive manner”.

Fianna Fáil spokesman on the environment Timmy Dooley underlined the “deep unease and concern right across the country” following the announcement of the new waste system. He added that the €75 payment to people with medical issues was too low and would not meet the needs of families dealing with excessive waste usage.

“These groups are already struggling financially, and this new regime should not add to their financial concerns,” he said.

“A Waste Regulator is desperately needed to ensure that there is no price gouging and fixing in the industry, and to ensure that consumers have a body to complain to if they have issues with their operator.

“We believe that as a sign of good faith by the waste operators, consumers should be provided with a breakdown of all options available to them showing them which would result in the lowest cost to them. This would show to consumers that operators are not using this change in system to simply increase profits.

Dermott Jewell from the Consumer Association of Ireland urged households to contact their waste provider as soon as possible to ascertain how their current package will be affected by the changes.