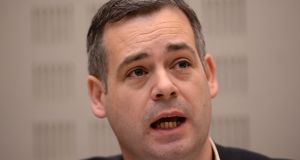 Pearse Doherty: Party’s taxation package amounts to a ‘rebalancing of the tax base’. Photograph: The Irish Times

Sinn Féin has proposed €2 billion worth of tax increases, from increasing the special VAT rate for hotels to a 7 per cent levy on incomes above €100,000, in its alternative budget.

Announcing the party’s budget plan, which proposes a net increase in spending of €650 million, leader Gerry Adams said there should be no tax cuts for higher income earners.

The Sinn Féin tax increases include a second home tax of €400; increasing the VAT rate for hotels from 9 per cent back to 13.5 per cent ; increases in betting tax and the bank levy; a rise in commercial stamp duty from 2 per cent to 4 per cent; a 7 per cent special tax rate on incomes over €100,000, as well as an extra 5.75 per cent rate on employers PRSI on salaries of over €100,000.

The special 9 per cent VAT rate would still apply to others aside from hotels, such as newspapers and restaurants.

Against this, Sinn Féin would abolish the property tax at a cost of €445 million and take those earning below €20,280 out of the Universal Social Charge (USC) net. Tax credits for the self employed would also be increased, at a cost of €64 million.

Donegal TD Pearse Doherty, the finance spokesman, said the overall taxation package amounts to a “rebalancing of the tax base”.

However, there would be substantial increases in capital investment in the housing sector, with €702 million for social housing. The party says this will allow for the construction of an extra 4,131 homes, in addition to the Government’s target of 5,869 homes next year.

Affordable housing schemes would be allocated €428 million, and Sinn Fein says this would allow 4,500 homes to be built.

The European fiscal rules allow capital investment to be averaged over a four-year period, so reducing the impact of increased capital spending on the fiscal space for next year.

Sinn Fein also proposes an increase in childcare subsidies. This would see children between six months and three years allocated an additional €2 per hour to their universal childcare subsidy.

“This would result in a new rate of €2.50 per hour for 2018,” the document says, and Sinn Fein adds it would mean that “the average creche fees paid by parents of children aged between six months and three years old would be more than halved”.

The cost of this is projected at €37 million next year and €116 million in a full year.

Other measures include a €500 reduction in the cost of third level fees, pay equalisation throughout the public sector over a three-year period, smaller class sizes and measures to mitigate the the affect of Brexit.

Deputy leader Mary Lou McDonald said the party wanted to “root out some of the discrimination” for young people and for women.