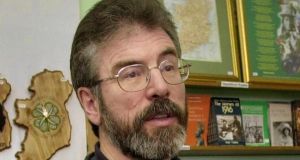 Gerry Adams: “Worried about the damage [his arrest] may be doing to the image of policing,” according to Assembly member Gerry Kelly. Photographer: Dara MacDonaill

Sinn Féin president Gerry Adams has been released by the PSNI investigating the murder of 37-year-old mother of 10 Jean McConville in 1972.

A file on the case is to be sent to the Public Prosecution Service.

Shortly before being freed, another senior Sinn Féin figure said Mr Adams was “worried about the damage [his arrest] may be doing to the image of policing” and the peace process.

North Belfast Assembly member Gerry Kelly said the arrest and questioning of Mr Adams over the IRA murder and secret burial of Jean McConville 42 years ago was “quite a serious situation”.

His remarks follow a barrage of protest from unionists and others after Deputy First Minister Martin McGuinness’s claims that the detention would compel republicans to reconsider their support for the police.

Loyalist invective
Speaking against a barrage of heckling from a loyalist protest at the gates of the police station last night, who shouted “fenian bastard” and other abuse, Mr Kelly said Mr Adams believes the timing of his arrest and detention “is political”.

“The extension of it is political and he is worried about the damage it may be doing to the image of policing.”

“I’m told he is being asked questions about what is called ‘open source material’. In other words, they are producing photographs that might be 40 years old and already in the public arena. They are referring to his book which has been out 20 years and newspaper articles which are decades old. They are also asking him about the Boston tapes.”

Mr Kelly said he did not know what the outcome would be.

Asked about Sinn Féin’s position on policing, Mr Kelly replied: “We will assess it all as time goes on. We are in policing because we believe in the new dispensation in policing. If there is policing that we see as wrong then we will speak out against that.”

He warned: “This is quite a serious situation. He is the leader of Sinn Féin. He is being questioned about things that happened over 40 years ago. Let me say this very clearly: The McConville family and the suffering that they have gone through is not going to be assisted by another injustice which is being perpetrated now. Gerry also spoke about . . . the anniversary of the death of Bobby Sands [today] and obviously we will be thinking of that at this time.”

SF condemned
Allegations of political policing have again been

First Minister Peter Robinson earlier stepped up his condemnation of Sinn Féin and their position on Mr Adams’s arrest, accusing them of “bullyboy tactics” and a “thuggish attempt to blackmail the PSNI”.

In a vivid illustration of the mounting tensions between the DUP and Sinn Féin which could split the Executive, Mr Robinson added: “The publicly conveyed threat to the PSNI delivered by the highest levels of Sinn Féin that they will reassess their attitude to policing if Gerry Adams is charged is a despicable, thuggish attempt to blackmail the PSNI.

“The threat now means that ordinary decent citizens will conclude that the PSNI and the Public Prosecution Service have succumbed to a . . . threat if Adams is not charged.”