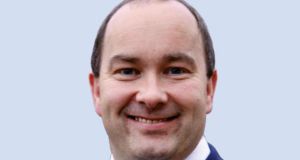 Sinn Féin has sharply criticised the Government’s failure in its new diaspora policy, to deal with the right of emigrants to vote.

The party’s new spokesman for the diaspora Senator Trevor Ó Clochartaigh said 115 countries and territories had systems in place to allow their emigrant citizens the right to vote.

He pledged to establish a new party working group to further develop Sinn Féin’s policy on diaspora matters. They would consult stakeholders and “we will ensure that the policy being developed is included in any programme for government that this party will devise and implement”.

Claiming Minister of State for the Diaspora Jimmy Deenihan had “dropped the ball” on emigrants’ voting rights, Mr Ó Clochartaigh said the Minister had “kicked to touch” on this crucial issue of the representation of the diaspora in Dáil and Seanad elections and voting rights in local, presidential, general elections and referendums.

The Connemara-based Senator said Ireland was “the best little country to do business in but organising votes for the diaspora is a bit too complicated for this Government to figure out”.

He said the 115 countries and territories with systems in place to allow their emigrants to vote included 21 African nations, 13 north and south American countries, along with 15 Asian countries, six Pacific states and 36 European countries. “So much for is feidir linn,” Mr Ó Clochartaigh said.

Sinn Féin in government would not treat emigrants as second class citizens.

“We unequivocally support the right of all Irish citizens to vote for the President, to appropriate representation in the Dáil and Seanad with full voting rights.”

In the meantime, he would “ensure that the Irish Government is held to account and encouraged to take on any policy initiatives that Sinn Féin brings forward”.

Senator Ó Clochartaigh said “we cherish all the children of Ireland equally no matter where they live. Sinn Féin will uphold their rights”.