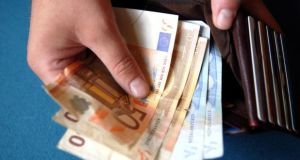 Sinn Féin has pledged to introduce a mandatory living wage, which would be about €2.50 higher than the minimum wage if it is in Government after the next election.

Sinn Féin has pledged to introduce a mandatory living wage, which would be about €2.50 higher than the minimum wage, if it is in Government after the next election.

The party said it agrees with campaign groups who argue €11.45 an hour is the minimum level of pay at which a person can make ends meet. The current minimum wage is €8.45.

“There is an epidemic of low paid and precarious employment right across the economy,” said the party’s deputy leader Mary Lou McDonald.

Sinn Féin promised to deliver an incremental move to a living wage over the course of three years if it is in Government after the next general election.

However, employers have warned against increasing the minimum wage and have said a higher “living wage” would hurt employment and come with a fiscal cost.

In a presentation prepared for an appearance before the Oireachtas Joint Committee on Jobs and Enterprise in February, employers group Ibec said the minimum wage in Ireland was high by international standards.

“At current exchange rates our national minimum wage is about the same as the £6.50 per hour rate in the UK. At the exchange rate of 12 months ago it was 10 per cent higher.

“Exchange rates are volatile and it is vital that Ireland sets its rate at a level which doesn’t leave businesses... vulnerable to exchange rate volatility,” it said.