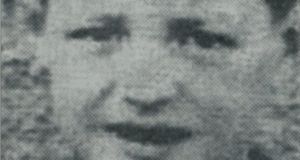 People in West Tyrone will question whether they should vote for Sinn Féin in the byelection caused by the resignation of MP Barry McElduff, the brother of a teenager killed in an IRA bombing has said.

Mr McElduff resigned amid controversy over a video he posted on Twitter on the anniversary of the 1976 Kingsmill massacre, in which 10 Protestant workmen were shot dead by the IRA. The video showed Mr McElduff balancing a loaf of Kingsmill bread on his head and was widely viewed as an insult to the victims.

David Temple, whose brother William (16) was one of nine people who died when three car bombs exploded in Claudy, Co Derry, in 1972, said that “time is no healer” and the day William died “is still as raw in my mind as ever it was”.

He said Mr McElduff’s video was “a total disgrace” and that “a man who held such a high office should not have done that.”

Mr Temple, who lives in Donemana in the West Tyrone constituency, said he believed Sinn Féin was now on “shaky ground”, even with nationalists.

He said both Catholics and Protestants had condemned the Kingsmill massacre as wrong, and people from both communities were outraged by the video.

“On the ground now there are very good relationships [between both communities], and then that boy came out of the blue and wrecked everything, all the good work that has been going on behind the scenes,” he said.

“The decent Roman Catholic people also suffered during the Troubles, and they’ll turn round now and say in West Tyrone, ‘Now, what are we voting for?’ They will now study what they’re doing with their vote.”

Mr McElduff, a longstanding and popular politician in the constituency, was elected MP in June with a majority of 11,000, having won more than 50 per cent of the vote.

Mr Temple added: “I know Sinn Féin in West Tyrone will still have a strong vote, this will not rock them, but at the end of the day there will be a lot of people with a lot of thoughts in their minds and asking, ‘Where do we go from here?’ ”

Kenny Donaldson, a spokesman for Innocent Victims United, welcomed Mr McElduff’s resignation, but said it was “regrettable” it had taken so long.

“Painful sores have been reopened and exposed,” he said. “Sinn Féin has issued statements in recent days, including through Mr McElduff, which on the face of it represents new language in respect of the Kingsmill atrocity.

“Words are helpful but people – particularly victims of terrorism – will judge the party and the republican movement through their actions,” he said.

Trevor Clarke, the chair of Derg Valley Victims’ Voice – which describes itself as representing victims of republican terrorism in West Tyrone – also welcomed Mr McElduff’s resignation, which he believes was politically motivated.

“We have finally seen the right thing done with the resignation. However, it may be that it only happened as a result of the negative press experienced by Sinn Féin,” he said.

“Northern Ireland desperately needs people in political life to stop their practice of eulogising terrorists and terrorism ... When people see that, it reignites pain and hurt, and I hope if anything positive comes out of this it’s that people stop and think carefully about how we are to move forwards.”