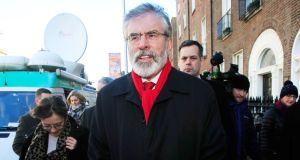 Sinn Féin is certain to have a good election and will build on its current tally of 14 TDs.

The 12 deputies who are contesting again (with Cork’s Sandra McLellan and Leitrim’s Michael Colreavy bowing out) are all likely to be returned to the Dáil with a significant number of new colleagues.

A senior party official has insisted internal polls suggest it could win 30 seats, but disappointment in the 2007 general election has created shyness about going public with targets.

Of course, opinion poll ratings do not always translate into seats on the ground, given Ireland’s complex system of proportional representation by means of a single transferable vote (PR-STV).

Gains are expected to come from constituencies such as Dublin Mid West, where councillor Eoin Ó Broin is widely tipped, and Wicklow, where many locals think councillor John Brady is a certainty.

In Waterford, David Cullinane’s strong Seanad and media profile should see him take a Dáil seat at his fourth attempt.

Mr Cullinane’s wife Kathleen Funchion, from whom he is separated, may take a seat in Carlow-Kilkenny, after a respectable performance in the May 2015 byelection.

Councillor Micheál MacDonncha could triumph in Dublin Bay North, along with Paul Donnelly in Dublin West and Maurice Quinlivan in Limerick City.

The party will take at least two seats in Donegal, with Pearse Doherty and Padraig MacLochlainn. There is a two-seat target in Louth, where Imelda Munster is running with party leader Gerry Adams, and in Dublin South-West, with Sean Crowe and Sarah Holland.

Sinn Féin’s electoral progress in the Republic has been steady in recent years, and the envy of many political opponents, but party stalwarts concede a combination of factors have meant it has failed to reach its potential in some areas.

Firstly, the party’s traditional ‘transfer toxicity’ has meant that more transfer-friendly candidates have leap-frogged Sinn Féin representatives who pulled in a better initial first-preference vote than their opponents.

Secondly, Sinn Féin consistently proves hugely popular with young voters. Difficulties in getting youthful supporters to exercise their democratic franchise and actually go to polling stations to vote has driven many a candidate to distraction.

Thirdly, the party’s organisation has not been strong in certain geographical areas where larger parties have traditionally held sway, making seat gains difficult.

However, this could be the election at which the impact of those three factors finally fades.

While the party has worked hard to select transfer-friendly candidates, a general strengthening of the party brand has meant the ‘toxicity’ factor is dwindling. Expect opponents to major on Thomas “Slab” Murphy factor, however.

The enormous impact of the youth vote in the same-sex marriage referendum appeared to give the lie to the often-repeated line that young people are not interested in politics.

Party activists have thrown themselves into root and branch activities aimed at improving Sinn Féin’s standing in certain constituencies.