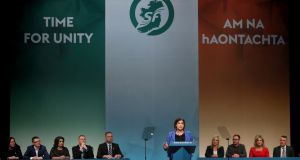 The Northern command of Sinn Féin, so to speak, was in good shape at the weekend, even if their comrades south of the Border weren’t quite so confident after the reverses of the presidential, local and European elections.

The big push naturally was to re-elect its “magnificent seven” MPs in the Westminster general election and to add John Finucane to the list in North Belfast by ousting the DUP’s House of Commons leader Nigel Dodds.

Finucane and Elisha McCallion, the outgoing MP for Foyle, who under threat from SDLP leaders Colum Eastwood, got plenty of platform time over the weekend. It could go well for them but equally it was acknowledged that Finucane and McCallion’s success was far from certain.

John O’Dowd got a few minutes too on Saturday morning, when RTÉ was broadcasting, to talk about a bill of rights for Northern Ireland but not to talk about his challenge to Michelle O’Neill for the deputy leadership. He did open his contribution with his take on Mark Twain that “media reports about my demise have been much exaggerated”, but that was it.

O’Neill, as expected, was returned but we don’t know how the contest went because the figures weren’t released, although it is reasonable to assume that she won comfortably.

Why O’Dowd made the challenge in the first place remains rather a mystery. There was no surprise, however, about who the leadership was rooting for. There is still the sense that O’Dowd, as far as that leadership is concerned, displayed unwarranted effrontery in tilting at O’Neill.

But political life rolls on and Northern delegates are otherwise pumped up by the political opportunities ahead. They believe, a point made by several present, that Brexit has shot the issue of a Border poll on Irish unity up the agenda.

They were fully in accord with Mary Lou McDonald and O’Neill who separately said, “It is not a question of if, but a question of when” a unity referendum will be held.

One wonders was it wise for Northern Secretary Julian Smith to warn on Friday that if there was no agreement to restore the Northern Executive and Assembly by January 13th, the date when legislation effectively allowing civil servants to run Northern Ireland comes to an end, that he faced a “duty to call” Assembly elections.

It wasn’t just the horror of facing pre- and post-Christmas elections but it was the sort of pronouncement that could encourage those in Sinn Féin who believe the best way to push the unity agenda is through continuing political paralysis.

Nonetheless, senior Sinn Féiners, those who would be directly involved with the DUP and the others in any fresh talks on reinstating Stormont, insisted throughout the ardfheis that they wanted powersharing restored.

That was the line from O’Neill on Friday night, and was repeated and reinforced by Conor Murphy MLA and McDonald on Saturday night.

There could be a window of opportunity after the British election on December 12th but there also are a number of variables that make it difficult to predict how it all will unfold.

If there is a settled British government after the election – whether a Tory majority administration or some coalition involving Labour – then British ministers might be in a position to dedicate time with their Irish counterparts and the Northern parties to reinstating Stormont.

Another imponderable here is if Finucane were to beat Dodds would that, as one Sinn Féiner said, put the DUP into a “tailspin” and see it rule out entering multi-party talks?

Smith, if he wants, can extend the January 13th deadline to allow time for late winter/early spring negotiations, but with a general election looming in the South that timeframe will be short.

But if there is another hung parliament in Britain, then there won’t be much energy for Northern Ireland concerns regardless of Sinn Féin’s stated willingness to re-enter the Executive and Assembly.

Gaiety Theatre projectors to be auctioned off next week 20:05
Garda launches coastal operation in Sligo and Leitrim to tackle crime 20:00
Early batch of child flu vaccine to expire within weeks after poor uptake 19:24
Keep up momentum to support older people in their homes, urges Alone 19:13
Postmortems due on two men found dead at hostel in Waterford city 19:06