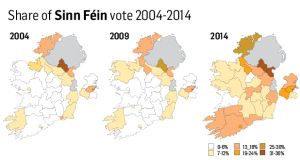 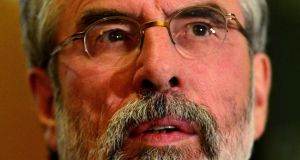 They are a new breed within the party, having joined when the peace process was well under way, and they focus mainly on economic and social policies. They are very loyal to Sinn Féin and leader Gerry Adams.

Stephen Cunningham (21) is typical of the new kind of party activist. He topped the poll with 971 votes in the Cork City North East ward and was elected to the city council. He is studying government in UCC, and is a member of the Martin Hurson cumann in the college,.

He joined Sinn Féin three years ago. “I was looking for a party suited to my views and ideology, delivering on economic equality, social justice, standing up for the common person and opposing austerity and cuts at community level.’’

Sinn Féin, he says, has shown leadership in moulding the peace process and making Ireland a better place . And he dismisses allegations made against Mr Adams.

“He has always denied being a member of the IRA and having any involvement in the murder of Jean McConville. I believe him 100 per cent and take him at his word.’’

Emma Murphy (25), who was elected to Dublin City Council for Cabra-Finglas, graduated with a degree in sociology from London Metropolitan University and has worked as secretary, youth officer and Irish language officer of the Carroll-Ashe cumann in Cabra.

She has a keen interest in sport and teaches physical education to children through Irish on a voluntary basis.

“When I came back from London the country was in an awful state. Fianna Fáil got us into the mess and Fine Gael and Labour were doing no better, and I was attracted by Sinn Féin’s socialist policies.’’

Mairead Farrell (24), who was elected to Galway City Council for the city east ward, holds a BA in economics and history from NUI Galway and a masters in finance. She joined the party six years ago. “Unfortunately, like so many people of my age group, I am unemployed. I am a republican with an interest in economics, and Sinn Féin’s opposition to bailing out the banks and speculators attracted me.’’

She said it was clear the party leadership brought about the peace process. “I have always had full confidence in Gerry Adams, and without him there would be no peace process.’’