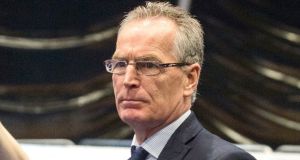 A senior Sinn Féin MLA has called on all nationalist parties to work together to deliver a united Ireland.

During a speech in Co Mayo on Sunday to commemorate the 1981 hunger strikes, Gerry Kelly said: “I challenge the leaders of the SDLP, Fine Gael, and Fianna Fáil to stop hiding behind the mantra of now is not the time to discuss unity. One hundred years on since 1916, as we face into Brexit, now is the time not only to discuss unity, but to plan and deliver Irish unity,” he said.

“Sinn Féin wants an Ireland that is defined by hope, prosperity and opportunity for all citizens irrespective of their age, gender, religious persuasion, cultural identity, political affiliation, ethnic origin, or sexual orientation.”

In the speech, the North Belfast MLA paid tribute to the late Martin McGuinness and the 1981 hunger strikers.

He also insisted that the political institutions at Stormont should be re-established.

“We want the institutions of the Good Friday Agreement reinstated, but on the basis of equality, mutual respect and integrity.

“The present talks, now stalled, are about implementing agreements already made. That is basic to a powersharing Executive and Assembly,” he said.

Sinn Féin demands in the talks process for restoring the institutions include an Irish language Act, a marriage equality Act, a Bill of rights and measures to deal with legacy issues in the North.

Mr Kelly said these demands were not unreasonable asks for people living in Northern Ireland, “especially when they are rights everywhere else in Ireland and Britain”.

Northern Ireland has been without a functioning devolved government since January, when the coalition led by the two biggest parties, the DUP and Sinn Féin, collapsed over a green energy scandal.

In January, Mr McGuinness resigned as deputy first minister in protest over the DUP’s handling of an inquiry into the controversial Renewable Heat Incentive scheme.

His party had demanded that DUP leader Arlene Foster step aside temporarily as first minister during an investigation into the scheme, which she had set up, but Ms Foster refused.

Since then, the two parties have been deadlocked over a number of issues.