At Stormont Arlene Foster said that she's happy the enquiry into the RHI is finally going ahead. 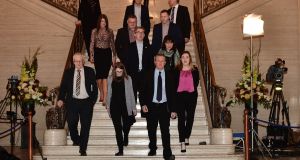 Outgoing Sinn Féin Minister for Finance Máirtín Ó Muilleoir has announced that he is to institute a public inquiry into the North’s Renewable Heat Incentive (RHI) controversy.

The RHI scheme was designed to encourage businesses, farmers and other non-domestic heating users to switch from fossil fuel to eco-friendly systems such as wood pellet boilers.

However, because of a lack of cost controls, it is projected that the scheme could result in an overspend by the Northern Executive of up to £490 million (about €567 million) over the next 20 years.

The Northern Executive collapsed due to a row over the scheme, which was introduced in 2012 by former DUP first minister Arlene Foster when she was minister for enterprise.

Sinn Féin’s Martin McGuinness resigned as deputy first minister earlier this month after Ms Foster refused to step aside temporarily to allow for an investigation into the scheme.

The Assembly will now officially dissolve next Thursday ahead of elections on March 2nd.

In a separate development on Thursday, Dr Andrew Crawford has stepped down as a DUP special adviser, following an allegation that he exerted pressure to ensure the overgenerous RHI scheme, which has become known as “cash for ash”, would continue at a critical time when cost controls should have been imposed.

The RHI scheme was introduced while Dr Crawford was working as a special adviser to Ms Foster in the department of enterprise.

On Wednesday, Dr Andrew McCormick, the permanent secretary at the Department for the Economy, told the Assembly public accounts committee he believed that in August 2015 Dr Crawford exerted pressure in order to delay by three months the imposition of cost controls on the scheme.

However, Dr McCormick said he had no evidence to substantiate his belief.

Ms Foster said on Thursday that Dr Crawford had resigned as special advisor in the Department of Agriculture.

Ms Foster praised Dr Crawford’s work and said that he felt he was becoming a “distraction to the important work” of DUP Minister for Agriculture Michelle McIlveen, because of the publicity he was receiving.

“Anybody who knows Andrew Crawford knows that he is a very private person and he certainly did not want to become the story, so he resigned and I have accepted his resignation regretfully,” she said.

There was some surprise that Sinn Féin has now called a public inquiry into the RHI scheme.

As recently as Thursday morning, the party had opposed attempts by DUP Minister for the Economy Simon Hamilton to set up such an inquiry.

However, on Thursday evening, Mr Ó Muilleoir moved to establish his own inquiry into the scheme.

“It is clear that, with time short until the Assembly dissolves, the only way to serve the public interest is for me as Finance Minister to move to institute a public inquiry immediately,” said Mr Ó Muilleoir.

“No other type of investigation is now feasible given time pressures.

“I have now instructed officials to take the necessary steps to establish a public inquiry under the Inquiries Act, 2005, into the RHI scheme.

“I have received legal advice in regard to these matters. I will make a full statement to the Assembly next week.”

Mr O Muilleoir said the inquiry would be impartial and objective.

“I will not interfere in its work. It will be tasked to get to the truth of this issue,” he said.

“Under the Inquiries Act, the inquiry report must go to the Finance Minister.

“I give a commitment that I or any Sinn Féin Minister will release the report in full to the public on receipt. I call on all parties to sign up to unrestricted, unedited publication.

“I am aware that the RHI issue goes beyond financial matters to questions of governance and probity.

“By getting to the truth of the RHI scandal, this enquiry report will, I believe, address those wider issues, and, therefore, put the public first.”

“I am very pleased that the inquiry is going to be set up and finally we will get some due process in and around these matters and we will get the truth of what happened.

“As I have always said, and as was confirmed in the [public accounts] committee, I have absolutely nothing to hide,” she said.

The UUP finance spokesman Philip Smith said Sinn Féin had “turned on their heels” by agreeing to hold the inquiry under the Inquiries Act.

“What on earth is Sinn Fein’s game here? One minute they are producing their own terms of reference for an independent inquiry. Then they are lambasting others for suggesting the Inquiries Act be used.

“Earlier today, [Sinn Féin’s] Declan Kearney was insisting they would not trigger an inquiry. Yet this afternoon they have totally turned on their heels.”