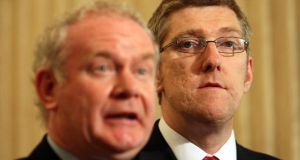 A Sinn Féin Minister in Northern Ireland has raised concerns about the relationship between the British security service MI5 and dissident republicans.

Minister for Education John O’Dowd has accused dissident paramilitaries and some within the security services of being “conflict junkies”.

Police officers were lured into an area near the office by reports of a suspicious object. As they were examining it, a second device exploded.

Mr O’Dowd has now raised concerns that MI5 agents are working within some of the dissident groups and they may, in certain circumstances, be protected from prosecution.

“Twenty-five years ago, when people said there was collusion between the state and paramilitaries, they were accused of ‘Provo propaganda’.

“It is now clear that it was not propaganda and it cost people their lives,” said Mr O’Dowd.

He said there was a responsibility for those in authority to challenge the security services to ensure their staff and their agents were not operating these organisations.

“There is a common cause between conflict junkies, whether they be under the banner of republicanism or in MI5,” he said.

She has had discussions with Stormont’s Department of Justice about funding the PSNI to combat the danger, but said uncertainty from the ongoing budget crisis in Belfast could cause the force difficulties.

“Many of their leadership have been arrested for suspected offences over recent months but there is still a significant amount of targeting and planning and it remains the case that were it not for the highly effective action taken by the PSNI and its security partners, including An Garda Síochána, I am afraid we would see many more tragedies on the streets of Northern Ireland.”