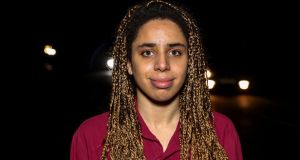 A Sinn Féin member has resigned from the party saying she was told not to discuss internal issues in public and after a party member called to her house to ask her to delete recent critical tweets.

Christine O’Mahony (22), from Co Meath, said she has left the party in light of the controversy surrounding Sinn Féin TD Brian Stanley, who said he had nothing to apologise for over a 2017 tweet about Leo Varadkar.

In that message, the now-head of the Public Accounts Committee wrote: “yippee 4 d tory. it’s Leo. U can do what u like in bed but don’t look 4 a pay rise the next morning.”

Ms O’Mahony criticised this online and said she encountered significant pushback from the party.

She received messages from other members of Ógra Sinn Féin stating that a cornerstone of the functioning of the party was to have discussions that were kept internal and that adhered to the principles of “democratic centralism”.

She was told that “going after” the party would only serve Sinn Féin detractors. She was also told that both senior and junior members of the party had raised concerns about social media posts in recent days. She was told “sensitive matters” must be kept internal and online messages, which contradicted this, would have to be taken down.

The masters student in UCD said that a member of the party, who she knows, then called to her family home.

“He came to my house and I was upstairs in the middle of a lecture,” she said. Her parents answered the door and she said he told her parents “that he got a phone call from head office about my tweet and I can’t be criticising the party especially as a member and a PRO [public relations officer], I can’t be criticising the party online. He wanted me to delete my tweets immediately and contact him.”

She said she made the decision to resign after this and said she believes members are being “silenced”.

“Seeing how the members are reacting to basic criticism, minor criticism…it shows they are not going to listen to me.”

Ms O’Mahony said that some members are being encouraged to give social media a break.

“But this is my platform. I can write about what I want. You can’t censor me just because I am criticising the party. “

A Sinn Féin spokesperson said: “Sinn Féin has guidelines for the use of social media that members are asked to adhere to, which includes asking members not to post offensive or harassing material.

“Internal party matters, should by definition, be discussed within the party. This does not prevent any member from speaking on any issue.”