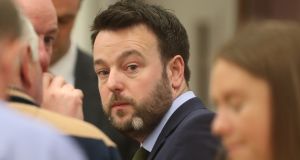 Sinn Féin topped the poll in the Foyle constituency, pushing the SDLP leader Colum Eastwood into third place in the party’s traditional stronghold of Derry.

Former mayor Elisha McCallion – standing as an MLA for the first time – took more than 9,000 first-preference votes and was elected on the first count.

Her party colleague Raymond McCartney came in just a few hundred votes short of the quota of 7,437, and was the second MLA elected.

Between them, they came in more than 2,000 votes ahead of the SDLP.

It is a significant moment for Sinn Féin in Derry, which has long tried to portray itself as the party of nationalism in a city which has consistently been a SDLP stronghold.

“There’s no doubt that Sinn Féin has outpolled the SDLP in Derry and South Down, and that’s outstanding.

“The number of people who voted for us exceeded even our expectations, but the message we were getting at the doors was that people understood what we stood for and that it was about treating people with dignity and respect, and they responded to that.”

Mr Eastwood was elected on the third count, and his SDLP colleague, the former environment minister Mark H Durkan, is expected to be elected shortly.

“I don’t know how anybody can say we haven’t done well when we’ve increased our vote by nearly 2,500 and we’ll hopefully have two good MLAs returned,” Mr Eastwood said.

“Of course Sinn Féin has had a fantastic election across the North and that’s because the political context has suited them so well.

“People wanted to punish Arlene Foster, and the way to do that in people’s minds was to vote for Sinn Féin.

“But I think Sinn Féin will really struggle to maintain position. The SDLP are still here and fighting strong, and I think you’ll see us regrouping and learning from some of the lessons that we’ve learned.”

The fifth seat in Foyle could go right down to the wire, with the DUP’s Gary Middleton battling it out with People Before Profit candidate Eamonn McCann for vital transfers.

Mr McCann, who was elected to the Assembly on the sixth seat last time around, said he didn’t believe he could attract enough transfers to get elected – even though he got more first-preference votes than he did 10 months ago.

His opponent, outgoing MLA Gary Middleton, is expected to attract enough transfers from the UUP candidate Julia Kee to push him over the line.

The most notable absence at the count centre has been the former deputy first minister Martin McGuinness, who topped the poll in Foyle in the last Assembly election.

Forced to step down from politics due to ill health, both Sinn Féin MLAs paid tribute to his influence.

“Although he wasn’t on the campaign, he was with me,” said Mr McCartney.

“He told me it was breaking his heart, not running, and I said to him that my pledge to him was that we would lift his heart with the result.”