Noeleen Reilly latest to claim she was victim of bullying campaign 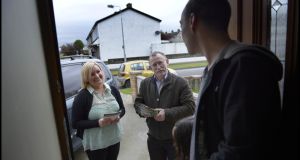 Sinn Féin has lost 13 public representatives in disputes over allegations of bullying.

The decision of Cllr Noeleen Reilly to resign from the party follows a long-running dispute with Dublin North-West TD Dessie Ellis.

Ms Reilly alleged she was the victim of a bullying campaign within the organisation. However, she too is alleged to have bullied Cllr Cathleen Carney Boud in the area.

The party said 23 representatives have either vacated their seats or left Sinn Féin in recent months. Ten, it says, left for personal reasons, while five were expelled and eight resigned.

Senior figures within the party have insisted there is no culture of bullying within the organisation but Sinn Féin has now lost representatives in Wicklow, Limerick, Westmeath, Cavan and Galway.

They include Senator Trevor Ó Clochartaigh who claimed there had been inaction on his complaints about disciplinary matters.

In Kildare, Cllr Sorcha O’Neill resigned from the party, claiming to be a victim of “hostility, bullying and aggression’’.

In Cavan, Eugene Greenan, a councillor and member of the party’s ardchomhairle, resigned from Sinn Féin and politics in the summer.

He, too, alleged a culture of bullying, which was denied by the party.

Nenagh-based Tipperary councillor Séamus Morris, a candidate in the last general election, said he had been expelled by the local organisation for “uncomradely behaviour’’, which was followed by a “dirty tricks’’ campaign.

An investigation by party headquarters, which included a five-hour interview with two officials, failed to find any substance to his allegations.