Sinn Féin leaning more towards coalition with Labour than FF 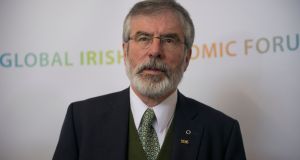 Sinn Féin is more likely to enter coalition with Labour than Fianna Fáil after the general election, Sinn Féin TDs have said, insisting that they would not enter government as a minority party under any circumstances.

In an overture to Labour TDs, a number of Sinn Féin TDs said they wanted to lead a left-wing government and the Labour party could form part of that.

The declarations came 48 hours after party leader Gerry Adams repeatedly refused to rule out a coalition with Fianna Fáil – which prompted a flurry of speculation about the party’s post-election options.

However, the speculation has sparked fury within Fianna Fáil, which is concerned that it could deprive them of support from people who are concerned at the prospect of Sinn Féin in power.

Dublin North West TD Dessie Ellis said: “There is a lot of very decent people in Labour. I think their leadership has literally left them high and dry, but there is a lot of good people and good public representatives in Labour . . . It would be difficult to see them come back with a strong mandate though.”

The party’s finance spokesman Pearse Doherty said he would not enter coalition with Fianna Fáil or Fine Gael: “ I believe there is an opportunity for a left-wing led government.

“Labour should take up their principles again. They left them at the door when they entered Government buildings 4½ years ago; they should return to where the grassroots want to be and they should embrace left wing policies again.”

Dublin South West TD Seán Crowe said Sinn Féin councillors in his area had an alliance with the Labour Party which has worked very well over the past few years.

“There is a precedent there that we can work with Labour and others in an inclusive manner than can bring about change. South Dublin is a good example of that,” he said. The latest Irish Times/Ipsos MRBI poll shows Sinn Féin on course to become the second largest party in the Dáil after the next election.

Though Mr Adams has not ruled out coalition with Fianna Fáil, he has insisted Micheál Martin’s party must agree to abolish water charges and the property tax.

Cork North Central TD Jonathan O’Brien said those were red line issues for the party and would be fundamental to any coalition negotiations.

Mr Tóibín said the party was still a toxic brand and people were still feeling the effects of the decisions made by Fianna Fáil when they were in government.

The party’s justice spokesman Pádraig MacLochlainn said nothing could be ruled out.

He said the challenge for the Opposition was to show it can provide an alternative to the Government of Fine Gael and Labour.

“The problem for the Opposition is this: unless we can demonstrate that we are willing to find a possible coalition government then the Government can easily say there is no alternative to us,” said Mr MacLochlainn.

“To have an election where there is clearly widespread anger against the Government but there is no alternative is nonsense. We are being honest in Sinn Féin.

“We are not ruling out Fianna Fáil but we are saying here are the conditions for them being part of it. Fianna Fáil has a choice – they can go into coalition with Fine Gael and form a conservative grand coalition or they can make some policy changes. The choice is their’s really.”

Mr White said the party does not have any issue with other parties, such as Fine Gael, aligning their policy positions with those of Labour.