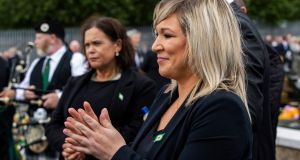 The row has escalated over allegations that Sinn Féin breached Covid-19 social distancing rules at Bobby Storey’s funeral on Tuesday with the DUP calling on Deputy First Minister Michelle O’Neill to stand down.

SDLP leader Colum Eastwood joined those criticising Sinn Féin when he also said Ms O’Neill should step aside and allow the Police Service of Northern Ireland investigate the matter.

Now, apart from Sinn Féin, all four parties on the Northern Executive – the DUP, SDLP, Ulster Unionist Party and Alliance – want Ms O’Neill to make way. However, a Sinn Féin spokesman said: “Michelle O’Neill will not be stepping aside as Deputy First Minister under any circumstances. The organisers did everything they could to ensure regulations were met and if it was not for the plan that organisers put in place with the PSNI to limit numbers then there would have been even bigger numbers in attendance.”

Ms O’Neill also received the backing of party leader Mary Lou McDonald who said she will not be calling for her colleague in the North to step aside as the Executive has considerable work to do, due to Covid-19.

“That work is under way but it is not finished yet. So no, I don’t think anybody should be punished or asked to step aside or step down because they attended the funeral of a friend. No, I don’t.”

“In relation to Bobby Storey’s funeral, I was very honoured to be asked by his family to attend the Mass . . . there was a limited cortege and people lining the streets,” she said.

“I’m very conscious that our whole island has come through an incredibly difficult time. And none more so than people who have lost loved ones in this time of a public health emergency.

“I think particularly at the beginning of this crisis it was just incredibly difficult for families to lose a loved one and then not to have the ability to say goodbye in the way that you would, in normal circumstances. And I’m very grateful for the fact that, because of the discipline and the efforts of people across the islands, that we have now managed to flatten the curve.”

Ms McDonald added that “there needs to be above all else in this circumstance absolute thought and sensitivity to the families in question”.

DUP MP for Lagan Valley Jeffrey Donaldson brought further pressure to bear on Ms O’Neill on Thursday morning when he said she should step aside.

DUP leader and First Minister Arlene Foster had stopped short of making such a call, instead saying Ms O’Neill should apologise and “make amends” for allegedly breaking social distancing rules at Mr Storey’s funeral. But after Ms O’Neill refused to apologise, and stood by the manner of her attendance at the funeral, the DUP parliamentary party met and urged her to stand aside.

“In light of the failure of Sinn Féin yesterday to grasp the opportunity to apologise it is our view that the Deputy First Minister must now step back from her role while these matters are investigated by the PSNI,” said Mr Donaldson.

“We will be asking the standards authorities in the Assembly to examine whether those MLAs who attended the funeral broke the code of conduct for MLAs. And we will also be asking the PSNI to specifically investigate any potential regulatory breaches by Executive Ministers, including the Deputy First Minister,” he told BBC Radio Ulster.

Thousands of people attended the funeral of senior IRA and Sinn Féin figure Mr Storey. But Ms O’Neill argued that in terms of about 30 people walking behind the cortege, and in the context of her attendance at the funeral Mass, that she did observe coronavirus rules.

“I stand over that my actions were within the regulations and the public health guidance, so I can only control what’s within my gift,” she said on Wednesday. She accused her opponents of “playing politics” with her attendance at the funeral.

Mr Donaldson however insisted Ms O’Neill broke the rules. “The law on these matters is clear and what happened at that funeral has sent out a very, very bad message to people in Northern Ireland, ” he said.

The Lagan Valley MP stopped short of saying the DUP would bring down the Executive if Ms O’Neill did not step aside. He questioned would this be the right action in the middle of a pandemic.

“Are we seriously saying that the right thing to do is bring the Executive crashing down because of the wrongdoing of Sinn Féin? Sinn Féin need to step up now and take responsibility for what they have done,” he said. “We should not be punishing the people of Northern Ireland for this. Sinn Féin are the people who need to take that responsibility.”

Mr Donaldson also called for an urgent meeting of the party leaders’ forum, which was established under the New Decade, New Approach deal that helped restore Stormont at the start of the year. The meeting should “discuss a way forward in order to re-establish confidence”, he said.

The Northern Executive is meeting on Thursday. Ms Foster and Ms O’Neill were due to deliver a regular press conference by video link together on Thursday afternoon after the Executive meeting, but this has been cancelled.

Mr Donaldsons said it would be “very difficult for that to happen in the current circumstances because we cannot afford mixed messages right now. The public needs leadership and that is what we intend to give them.”

He referred to how he and other SDLP politicians and supporters were unable to attend the recent funeral of party Assembly member John Dallat because they observed the Covid-19 rules, and that countless other people were in a similar position over the period of the virus.

Mr Eastwood said it was “patent nonsense” that Ms O’Neill observed the regulations. He said in reference to Ms O’Neill, “it is the people making the rules who are blatantly breaking them”.

“That is very difficult for people to take,” he said. “If people lose confidence in the message and the messenger they will begin to do their own thing.”