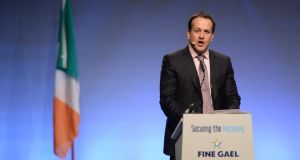 A Sinn Féin-led government would involve a rule of fear, the Minister for Health Leo Varadkar has said.

He said in a Sinn Féin administration there would be “no party whip, just party chains”.

In a speech to the Institute of Directors in Dublin he said that while the Coalition had lost TDs this would never happen in a Sinn Féin government.

“Its members swear blind allegiance and have made worship of the party line their religion. There would be no independent thinking in a Sinn Féin-led government, not even groupthink. There would be just one thought, one rule. And that would be the rule of fear.”

“Commentators like to criticise this Government for the use of the whip system- and it is too rigid — but imagine what it would look like under a party where no one disagrees with the master and where a strict policy of loyalty to the leader is enforced no matter how great the scandal or how big the crime.”