Sinn Féin focused on next phase of political evolution 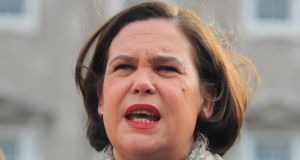 Sinn Féin is in transition, one year after an election which saw the party failing to make the gains it privately hoped for.

Although it had a relatively good election last year, increasing its number of TDs from 14 to 23, predictions of a more significant breakthrough did not materialise.

Sinn Féin does not always meet its opinion poll ratings in elections, a fact which has accelerated internal discussion on future strategy.

“Sinn Féin is different in that we are going through what we consider a post-revolutionary phase,’’ said a party source.

“With the peace process bedded down, securing a strong electoral base on the island is the priority and that means change in the Republic.’’

There is considerable speculation that party president Gerry Adams will stand down in the coming year, making way for Mary Lou McDonald to take over as leader in the Republic.

This would mean the party being led by Michelle O’Neill in the North and McDonald in the Republic, with Adams likely to retain an influential presidential role linking the party’s political operation on both parts of the island.

The carefully choreographed photo call on the day O’Neill was chosen as Stormont leader, when she walked with McDonald into the press conference, followed by Adams and Martin McGuinness, was seen as a sign of things to come.

“She has been his protege,’’ said a source. “It is not lost on Adams and the party that a woman from south Dublin, with no paramilitary baggage, is the obvious choice to lead Sinn Féin into the next election.’’

The party knows it has to break new ground if it is to broaden its electoral base.

This prompted McDonald’s announcement, in an Irish Times podcast, that Sinn Féin should consider participating in government as a minority party.

It had previously ruled out going into government unless as the major party.

The challenge for McDonald, when she does take over as leader, will be to capture some of the centre ground vote held by the established parties while retaining core support.

All parties privately recognise that Fianna Fáil and Fine Gael ruling out entering coalition with Sinn Féin is part of the Leinster House political game.

They point to Fine Gael’s opposition to sharing power in the 1990s with the then Democratic Left, which had evolved from the Workers’ Party, and then changing its mind.

The new intake of Sinn Féin TDs have blended in well with their long-serving colleagues in the Dáil. They are hard-working, focused and relentless in their pursuit of the other parties.

Having never served in government, they can indulge in the populism of opposition, while privately recognising that being in power would be an entirely different matter.

Adams is always well-briefed for Opposition Leaders’ Questions but carries the baggage of the Troubles which the other parties sometimes throw at him.

McDonald is tenacious and very effective when she stands in for him. Her transition to the leadership will be organised by the party’s ardchomhairle.

This is likely to happen sooner rather than later, given a general election could happen at any time.