Sinn Féin firm set up to mark Rising owes €109,949 to US organisation 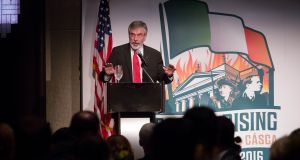 Gerry Adams, while president of Sinn Féin, at a Friends of Sinn Féin fundraising dinner in New York in 2015. File photograph: Michael Nagle

A company set up by Sinn Féin to commemorate the 1916 Rising still owed €109,949 to the party’s fund-raising organisation in the United States at the end of last year, according to accounts just filed.

Ireland 1916 Commemorations Company incurred significant debts arising from an exhibition it mounted inside the former Ambassador cinema on Dublin’s O’Connell Street, during 2016.

The bulk of the funding for the exhibition came from the party’s highly successful Friends of Sinn Féin fundraising arm in the US.

“Included in liabilities are amounts of €19,899 and €109,949 owed to Sinn Féin and Friends of Sinn Féin respectively,” the notes to the account said. “They have indicated that they will not seek repayment of these amounts until such time as the company is [in] a position to do so.”

The directors of the company are Treasa Quinn and Brian Dowling, who are also directors of Parnell Publishing, which publishes An Phoblacht, and Republican Merchandising.

Last year the president of Friends of Sinn Féin in the USA, Mark Guilfoyle, said the loan to the commemorations company did not constitute financial support for Sinn Féin the party. He said the US organisation still considers the money to be an outstanding loan.

The exhibition proved controversial because as well as having exhibits relating to the 1916 Rising, it also included material referring to the 1980-1981 hunger strikes.

The Advertising Standards Authority criticised the advertising of the event because it did not mention that it involved exhibits other than those linked to 1916.

This was in breach of a code that advertisers should not exploit “the credulity, inexperience or lack of knowledge of consumers”.

There was no response to a request for a comment from Sinn Féin. A submission to the US department of justice required under the US Foreign Agents Registration Act shows Friends of Sinn Féin raised $284,345 (€254,000) in the six months to April 30th, 2019.