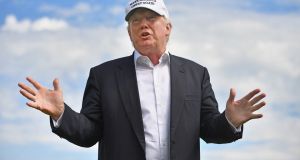 Sinn Féin has denied a claim by the Labour Party that Republican Presidential candidate Donald Trump donated money to the party in the United States.

Senator Kevin Humphreys on Friday claimed the $12 million raised by the Friends of Sinn Féin in the US since 1995 included a donation given by the controversial billionaire.

Mr Humphreys was referring to a fundraising dinner for Sinn Féin leader Gerry Adams in New York in 1995 which was attended by Mr Trump.

Among the guests at the $200-a-plate dinner at an upmarket Manhattan hotel were Bianca Jagger, Tom Hayden, film-maker Michael Moore and a former mayor of New York David Dinkins.

During his speech from the podium, Mr Adams made a specific reference to the billionaire, whose fortune was based on real estate in New York.

“This is not the Trump Tower, but I think I would . . .” he said before descending from the podium to shake hands with Mr Trump. Video footage of the occasion shows Mr Trump waving to the crowd.

However, a Sinn Féin spokesman said on Friday night Mr Trump had never made a financial contribution to the party.

“Donald Trump has never donated money to Sinn Féin. He did arrive at a lunch in 1995 as a guest of somebody else and got his photo taken with Gerry but he never donated any money and neither Sinn Féin nor Friends of Sinn Féin has had any contact with him since,” said the spokesman.

“So the question of him donating money to Sinn Féin doesn’t arise.”

Mr Humphreys countered that “a donation is a donation whether paid for by the individual or somebody on their own behalf.”

Sinn Féin was been one of the parties that criticised the manner in which Minister for Finance Michael Noonan greeted Mr Trump at Shannon as he arrived to visit his Doonbeg golf course in 2014.

The party’s finance spokesman Pearse Doherty told the MacGill summer school that year that the meeting was “cringeworthy”.

“It was an embarrassment and it goes back to the mentality that a lot of our political leaders don’t have the courage to stand on their own two feet. They feel an inferiority complex.”

Mr Humphreys contended that Sinn Féin’s approach to the US has been very careful and not without hypocrisy.

“Sinn Féin is very careful in trying not to upset their very influential donations in the USA,” he said.

“There is one soft message for the US and a harder message here. They don’t portray their so-called socialist beliefs in the US and are prepared to take large donations from Republican Party supporters.

The Irish Times reported on Friday that Sinn Féin had raised $354,111 in the US in the six months to the end of April, for political activities. None of the money raised is used to fund party activities in Ireland.