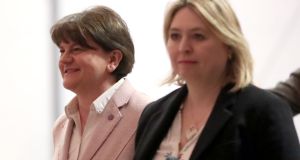 Addressing party faithful at the DUP’s spring conference in Ballymena, Co Antrim, Ms Foster said her erstwhile partners in devolved government were actively seeking to sow division in the region.

Firing the latest broadside in an increasingly acrimonious war of words between the parties, Ms Foster said the prospects of an imminent return to powersharing were not promising.

In the ongoing absence of devolution, she reiterated her party’s support for a form of shadow Assembly that would give locally elected politicians a role in scrutinising decisions taken in Westminster.

Northern Ireland Secretary Karen Bradley is currently examining the half-way house proposal as a potential means to govern the region.

Citing the recent £410 million (€469 million) injection of funds into the region through the DUP’s confidence-and-supply deal with the Tories in Westminster, Ms Foster insisted her party continued to deliver for the region, while claiming Sinn Féin offered nothing constructive.

“People are starting to see that not only were the naysayers who doubted that the confidence-and-supply money was real, very, very wrong, but that the DUP deliver for everyone in every part of Northern Ireland,” the DUP leader said.

“What are Sinn Féin delivering for our people? The answer is short and simple – absolutely nothing.

“Sorry, that isn’t entirely fair. Sinn Féin are at least trying to deliver. They are trying to deliver division and dysfunction. But we are not going to allow them to hold Northern Ireland to ransom any longer.

“The best way, by far, to deliver for everyone in Northern Ireland, is through sharing power in a restored Assembly at Stormont.

“This party is committed to devolution. We want to see power in the hands of locally elected and locally accountable ministers.

“But in the absence of devolution, the Democratic Unionist Party is finding other ways to deliver for Northern Ireland.”

Powersharing imploded last January amid a row over a botched green energy scheme. The rift subsequently widened to take in disputes over issues such as the Irish language, same-sex marriage and how to handle the legacy of the Troubles.

Sinn Féin has claimed Ms Foster agreed a draft deal to resurrect powersharing last month before pulling the plug in the face of an internal revolt among party members angry at the prospect of concessions on the thorny issue of the Irish language.

It is an allegation Ms Foster has strenuously denied.

Delivering the leader’s address at the conference at the Tullyglass Hotel, Ballymena, Ms Foster said: “Whether it’s health or education or jobs or infrastructure, the DUP is prioritising what is important to people of all persuasions in Northern Ireland.

“What are Sinn Féin prioritising? They’re putting their own narrow political interest first.

“We will continue to work closely with Karen Bradley as she makes good on her commitment to do whatever is necessary to fulfil her majesty’s government’s responsibilities to the people of Northern Ireland, including working with her on ways for the Assembly that the people elected last year to have an input.

“We must support and encourage the Secretary of State to take those necessary decisions because, as much as we want to see the Assembly and Executive up and running again, let’s face it, the prospects of a return of devolution anytime soon doesn’t look promising.”

Ms Foster also said the DUP needed more than ideology if it was to achieve its overarching aim of preserving the union with Great Britain.

“I truly believe that if we are to achieve our overarching aim of preserving the Union, then we have to concentrate on our ideas and not our ideology and focus on defying our opponents by making Northern Ireland work for everyone,” she said.

“Having secured an historic election victory (in last year’s general election) we cannot fall into the trap of complacency.

“We must build on that triumph, and the best way to do that is to persuade people that they should vote for the DUP not just because we are the biggest party. Or because we are best placed to beat Sinn Féin. But because we have the best ideas.”

Addressing an event in London examining a united Ireland, the party president said: “The way forward in the North is through real and genuine powersharing, the delivery of citizens’ rights and equal partnership government.

“Any proposed shadow Assembly would mark a retreat from powersharing and the leadership needed to restore the Good Friday Agreement framework. It would be an unacceptable step backwards, lacking credibility.

“The onus is now on the two governments to act and through their joint stewardship to remove the obstacles to restoring the political institutions.

“Both governments must now convene the British-Irish Intergovernmental Conference to find a way to implement outstanding agreements and to fully respect the rights of citizens to marriage equality, to language rights and the funding of legacy inquests.

“Direct rule is not an option. It was a failure in the past and would be so again.

“It’s time to face the real challenge to deliver citizens’ rights and to re-establish the institutions of the Good Friday Agreement.” – Press Association