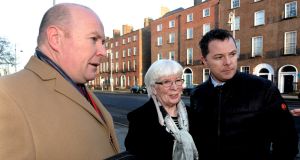 Austin Stack with his mother Sheila and brother Oliver: called the tweet ‘disgusting’ and said Ms Devine should be expelled from Sinn Féin. Photograph: Cyril Byrne

The decision by Sinn Féin to impose a three-month suspension on a senator for retweeting a malicious post about a prison officer murdered by the IRA has been strongly criticised by Fine Gael and Fianna Fáil.

The party suspended Dublin-based Senator Máire Devine after she retweeted a post by the anonymous @rnerrionstreet Twitter account referring to Brian Stack as a “sadist prison officer”.

Mr Stack, a senior officer in Portlaoise prison, was shot in Dublin in 1983 by a member of the IRA. He died 18 months later.

Sinn Féin leader Mary Lou McDonald said the party had “zero tolerance for actions that bring grief to victims and their families”.

“Senator Devine understands she made a catastrophic error of judgement in retweeting something that came from a false account,” she said. “Her bigger mistake was not to automatically delete the tweet and not to have automatically apologised.”

Senator Devine has since apologised, saying it was never her intention to cause distress. Mr Stack’s son Austin said the tweet was “disgusting,” and the party should expel her.

Fianna Fáil foreign affairs spokesman Darragh O’Brien referred to Barry McElduff, who resigned as an MP in January after posting an offensive video on the anniversary of the 1976 Kingsmill massacre. “There seems to be a tolerance where it is okay to besmirch a a person’s character and his memory,” he said.

Fine Gael Senator Neale Richmond said: “There’s a wider issue where Sinn Féin representatives think it’s okay to make light of our not so distant past.”