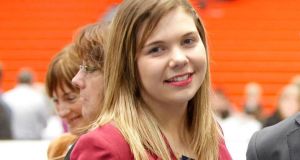 Gerry Adams has claimed every political party faces rows and resignations after a councillor left Sinn Féin after claiming she was subjected to “toxic” bullying.

Lisa Marie Sheehy (23), from Kilfinane, Co Limerick, said she came to her decision after being bullied and harassed by some in the Sinn Féin party.

“I was bullied, and I’m not going to bend over for bullies,” she said.

Ms Sheehy , who is the latest in a series of people to claim they were subjected to bullying within the party, described her experience as “disgusting”.

“It was something I’d never experienced anywhere,” she said.

Her former party colleague in Limerick, Cllr Ciara McMahon said she could “empathise on a very close level” with Cllr Sheehy and that she was “not shocked” by the allegations raised.

“She needed to do what she needed to do,” said Cllr McMahon, who remains a Sinn Féin member. “We had spoken about her concerns over the last while, and I completely understand how she feels.”

Cllr Sheehy claimed the party was not the grouping of comrades it claimed to be but declined to provide examples of what happened to her.

“It’s not that at all; it’s toxic,” she alleged, adding that she did not know why she had been targeted.

Mr Adams said he regretted the resignation but said the allegations had been investigated by Sinn Féin and no evidence was found to prove them.

“I regret very much the fact that she has resigned,” he said. “There is no culture of bullying within Sinn Féin. It is actually unfair to the membership of the party that that allegation has been made.”

When asked if the latest claims from Ms Sheehy showed a pattern, Mr Adams replied: “It happens in all parties.”

Pearse Doherty, Sinn Féin’s finance spokesman, told RTÉ radio that Ms Sheehy’s claims of bullying “could not be substantiated”. The Donegal TD also claimed he was “disappointed” to hear of her resignation.

A statement on Cllr Sheehy’s Facebook page claimed she was “plotted against and pushed out of the party by a small number of members. “It was beginning to affect my health and self-esteem. It was very distressing,” she said.

She said she brought her concerns to the party but was unsatisfied by its response. The matters complained of were investigated by Sinn Féin with Cllr Sheehy and others interviewed. She said this investigation had found no evidence of wrongdoing.

Cllr Sheehy said she expected the way people were treated in the party would lead to more resignations or cases of representatives declining to run for the party in future elections.

She was elected to Limerick City and County Council in 2014 on the first count and said on Tuesday that she would continue to serve her constituents in the Cappamore/Kilmallock Municipal Area as an Independent.