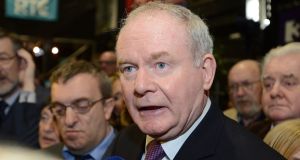 Sinn Féin emerging as the largest Opposition party would be “hugely significant” and the party is better organised than ever before, Northern Ireland deputy first minister Martin McGuinness has said.

Speaking the Dublin city count centre at the RDS in Ballsbridge, Mr McGuinness said attention is now turning to how close Fianna Fáil and Fine Gael in terms of Dáil seats.

“People’s thoughts are now turning to how a government is going to be formed and I think given what is likely to develop today and tomorrow,” he said.

“It’s going to be very interesting to see how a government can be formed on the other side of this. Sinn Féin can only form a government if there is enough people of like mind to form a government. It is far too early to say. We don’t know what the results will bring.”

He said Sinn Féin is now the biggest player on the left, and that other left wing TDs and parties needed to reflect on how best to achieve their goals.

A failure of the left to come together would leave Irish people “to the mercy of two right wing political parties”, he said.

There is no point in getting speculation at this stage.

“The significance for us in Sinn Féin is that we are better organised in every one of Ireland’s 32 counties than we have ever been.

This has been a hugely successful election for Sinn Féin. We have increased our percentage vote. We are going to increase our number of seats.”