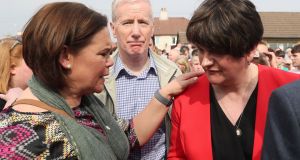 Sinn Féin leader Mary Lou McDonald and DUP leader Arlene Foster: One of the reasons Sinn Féin wants ‘a win’ on the Irish language issue is because it’s so hard for the DUP to swallow. Photograph: Brian Lawless/ PA Wire

Every time Sinn Féin says it will approach the forthcoming Northern talks with “positivity” or “hope”, its leaders soon add a qualification – there has to be a plan if they don’t work.

It’s easy to see that the party isn’t very optimistic that the talks will reach agreement on the relaunching of the institutions. Of course, the only route that the party sees for a successful conclusion of the talks is one that delivers its requirements – an Irish language Act, the legalisation of same-sex marriage and the extension of abortion rights to the North – the trinity of demands that the party now refers to as the “equality agenda”.

If the DUP won’t agree – and it won’t, as Sinn Féin knows, at least not immediately – then Sinn Féin wants the two governments to step in. Or, more accurately, it wants the British government to step in and legislate for its “equality agenda” at Westminster, over the heads of the DUP.

In fairness to it, the party acknowledges the two obvious things about that request: firstly, it faces the obstacle of the DUP’s confidence and supply agreement with the Conservatives and, secondly, looking to the British to govern Northern Ireland because its parties can’t isn’t very self-determination-y, is it?

When pressed, senior party sources acknowledge that the Irish language Act is of a separate order to the same-sex marriage and abortion issues, which have really been adopted by the party only relatively recently.

Sinn Féin’s current position on abortion, after all, is less than a year old. And for all the prominence given to the two social issues now, you could easily forget that they had nothing to do with the collapse of the institutions in 2017.

The Irish language issue, though, is more important and is regarded by the party and much of its base as a litmus test for any new administration. The party wants, and feels it needs, “a win” on the issue, not just because it would be a signal to many of its supporters about parity of respect for Irishness in the North, but because it’s so hard for the DUP to swallow. In the North’s bitterly polarised politics, a win for you is a loss for me, and vice versa.

Senior party figures have also signalled that they will not accept any agreement to reconstitute the assembly and the powersharing administration that runs the risk of collapsing again after a few months. This rather pointedly ignores the fact that it was Sinn Féin which brought down the powersharing institutions two years ago over the botched renewable heat incentive (RHI) scheme (and that the DUP has a standing offer to relaunch them without pre-conditions) but it does underline the low expectations that the party has about these talks.

There is a lingering suspicion around some quarters that the Taoiseach’s office and Number 10 Downing Street announced the talks without a clear plan for what would happen next. In fact, there has been extensive work done by officials behind the scenes preparing for these talks. That is no guarantee they will reach any satisfactory conclusion, though. Judging by the mood music, the chances for success hardly look overwhelming right now.