Party eyes UK poll as opening to unseat Nigel Dodds, but fortunes in Republic on the slide 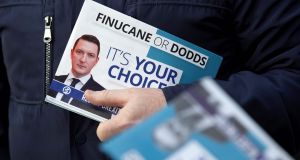 The Sinn Féin Ardfheis takes place in Derry this Friday evening and is the start of a two-day gathering that presents the party with a welcome opportunity to regroup after a torrid 12 months.

The ardfheis will also enable the leadership to fire up its troops in advance of the forthcoming UK general election. The party is bullish about the chances of John Finucane taking the seat held by Nigel Dodds in North Belfast, where the SDLP has stood aside in order to facilitate an attempt to take out the DUP’s deputy leader.

More significant than the contest for deputy is the direction for the party in the immediate future. This poses questions on both sides of the Border

But it is less confident about the prospects for next year’s expected election in the Republic, where unless it can effect a spectacular turnaround in fortunes the prospect of losing several Dáil seats looms.

Much attention is likely to focus on the contest for deputy leader, precipitated by a challenge to incumbent Michelle O’Neill, by MLA John O’Dowd.

But more significant than the contest for deputy is the direction for the party in the immediate future. This poses questions on both sides of the Border.

Will it seek to relaunch powersharing in the North once the election is over and Brexit (perhaps) is out of the way? And in the Republic, how does Mary Lou McDonald rejuvenate the party and connect with voters to defend the seats under threat? Moreover, what prospects for success in either case?

Will the party seek to answer those questions, or will it maintain the catch-all mantra that the answer to these problems is to seek a united Ireland?

It has been a difficult year for McDonald and her party. She endured a humiliating defeat at the presidential election last year, when she insisted on running a candidate despite a widespread belief that Michael D Higgins could not be beaten – an analysis that persuaded Fine Gael and Fianna Fáil to sit out the contest and back Higgins.

The presidential election has no implications for a general election. But European and local elections do. And Sinn Féin suffered a very significant defeat in those, losing half its councillors and two of its three MEPs.

And while it held its own in the North’s local elections in May, the party’s focus has moved south in recent years – which, in a way, is part of the purpose of McDonald’s leadership.

The other part of her purpose as leader was to position the party for government in Dublin. She signalled a big move on this when she became leader, indicating a willingness to join a coalition government led by Fine Gael or Fianna Fáil, reversing the party’s previous position to support a left-led government only.

While the big two have ruled out coalition with Sinn Féin, that might not be the final word on the subject. But it’s hard to see either Fianna Fáil or Fine Gael consenting to a government that would have a Border poll and Irish unity as its chief priority which would surely be Sinn Féin’s minimum price for coalition.

The united Ireland mantra is effective as a rallying point for the party’s activists. But the evidence thus far is that it will not save Dáil seats, nor pave the way to a seat at government in Dublin.

Joe Biden does not want to see guarded border in Ireland after Brexit 22:55
Minister to meet Dublin City Council on future of Oscar Traynor site 22:27
Lack of ‘consistency’ in how Tusla operates, says chief executive 22:05
Prison service accepts ‘urgent need’ to better care for mentally ill inmates 22:05
Cannabis grower’s first crop so bad she could not give away, court hears 22:01