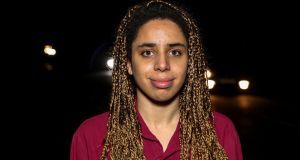 Christine O’Mahony: she said she left the party in light of the controversy surrounding Brian Stanley. Photograph: Crispin Rodwell

A former Sinn Féin student activist who was subject to intense party pressure after criticising a tweet by Brian Stanley has said party representatives have reached out and apologised for her treatment.

Christine O’Mahony, a member of UCD Ógra Sinn Féin, resigned from the party after a Sinn Féin member called to her house to demand she delete tweets that were critical of the party.

Ms O’Mahony, who was also told not to discuss internal issues in public, said on Sunday that both her local TD in Meath East Darren O’Rourke and the chair of the North Leinster cúige (district council) of the party had since made contact with her to say they were very sorry at what had happened to her, and that she had the right to stand up for her beliefs.

Ms O’Mahony had criticised Mr Stanley for a 2017 tweet about Leo Varadkar which appeared to refer to the Fine Gael leader’s sexuality.

Mr Stanley, who initially defended the comment before deleting his social media accounts late last week, had tweeted: “yippee 4 d tory. it’s Leo. U can do what u like in bed but don’t look 4 a pay rise the next morning.”

Sinn Féin’s housing spokesman Eoin Ó Broin said on Sunday that a social media “pile-on” against anyone who criticises Sinn Féin did not aid or assist the party.

He rejected a claim by Minister for Further Education Simon Harris that the party had sent in the “heavies” to Ms O”Mahony.

Ms O’Mahony (22), a postgraduate student in human rights in UCD, told The Irish Times on Sunday she had no intention of rejoining the party. She said she had been concerned for some time that some Sinn Féin supporters on Twitter used homophobic language in their attacks on Mr Varadkar.

She also said she was uncomfortable with the way in which some had defended comments made about Mr Varadkar by South Dublin county councillor Paddy Holohan.

“In the last few days I have been accused of being a Fine Gael plant and being paid by Fine Gael to ruin the party. I am very critical of Fine Gael and Fianna Fáil. In the past I will even admit I have defended Sinn Féin when the party’s position seemed indefensible.”

The LGBT officer of the Sinn Féin Ógra branch in UCD has also resigned over the matter. Seán Pender (19) said he had resigned in solidarity with Ms O’Mahony for making legitimate criticisms, not just over homophobic comments within Sinn Féin but over other issues.

“It was the last straw. I saw that there was a relatively high percentage of Sinn Féin supporters who supported Donald Trump. I thought if I was in the party I could change that but you cannot change a party when the people attempting to change it are silenced.”

A Sinn Féin spokesman said the people who went to Ms O’Mahony’s home and spoke to her parents were advised it “was not necessary and should not have happened”.

Mr Stanley was asked by party leader Mary Lou McDonald to take a week off and is making a statement to the Dáil on December 15th.

Catherine Murphy of the Social Democrats will chair the Public Accounts Committee in his absence.