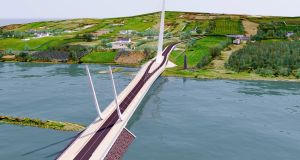 Artist’s impression of the Narrow Water Bridge project, which will link Omeath in Co Louth with Warrenpoint in Co Down. Photograph: Louth Council/PA Wire

Sinn Féin and the Democratic Unionist Party are requesting more than €550 million from the Government for infrastructural projects in Northern Ireland as part of negotiations to break the political impasse in Stormont.

It is understood an informal paper outlining spending requests has been distributed as part of the talks but has not been formally tabled.

The talks are expected to conclude next week.

Minister for Foreign Affairs Charlie Flanagan briefed the Cabinet on the rough outline of the spending request at its meeting earlier this week but no specifics were discussed.

Sources said a document is under consideration by Mr Flanagan, Seán Sherlock, the Minister of State at the Department of Foreign Affairs, and Minister for Public Expenditure and Reform Brendan Howlin.

The main elements are the completion of the A5 motorway to Derry, the restoration of the Ulster Canal and the Narrow Water Bridge connecting Omeath in Co Louth and Warrenpoint, Co Down.

Funding for a number of smaller projects is also requested. An overall package from Dublin and London would be £800 million, or €1.13 billion.

In its recent capital investment plan, the Coalition said it “remains committed to investing in infrastructure to support North-South cooperation” if there is a “stable political environment in the North”.

The plan referred to the A5 motorway, Ulster Canal and Narrow Water Bridge but no specific funding commitments were given.

Government sources described the Narrow Water Bridge as a “vanity project” and said supports for the “real economy”, such as entrepreneurial projects, could gain more traction.

One Minister said there is no real surprise at the request for funding from the Northern parties.

“It’s true to form,” said one. “There’s not that much enthusiasm to send money up North that could be spent on infrastructure here.”

Another Coalition source described it as “a shopping list that they want the UK and Irish governments to pay for”.

A Sinn Féin spokesman said it has consistently called on the Government to honour its commitment to projects such as the A5.