Sinn Féin aiming to be biggest party by 1916 centenary 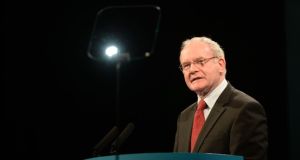 Sinn Féin plans to mark the centenary of the Easter Rising by becoming the biggest party in Ireland North and South, the North’s Deputy First Minister Martin McGuinness has told his party’s annual ardfheis in Derry.

Mr McGuinness, who received standing ovations at the start and end of his ardfheis speech last night, said the people of Ireland would have the opportunity to “endorse that vision” in the general election in the South and in the Assembly elections, which take place next May.

“The symbolism of doing so on the 100th anniversary of the Easter Rising will be absolutely massive,” he told the conference.

“Much has been said already about the prospects of Sinn Féin emerging as the biggest party following the Dáil election. That is certainly our goal,” he added. “But it is also our goal to become the biggest party in the North at the 2016 Assembly elections. Both those goals are achievable.”

Mr McGuinness said Sinn Féin was the only party that was serious about building the kind of nation which was declared in 1916: “A just nation. A fair nation. A nation that cherishes all of her children equally, regardless of colour or creed. That is what we stand for. That is what more and more people across this island are endorsing every day.”

Sinn Féin president Gerry Adams, meanwhile, brushed off queries about The Irish Times report of a number of US businessmen expressing concern that Sinn Féin was pursuing anti-business policies. In a brief doorstep interview just before the conference began, he said Sinn Féin was “good for business”.

He added that it could hardly be argued Sinn Féin was “bad for business” when it was getting such support in the US from businesspeople. “We’re very good for business. We’re very pro-business.”

Later last night the ardfheis overwhelmingly adopted a motion stating that “Sinn Féin will not go into a Fianna Fáil-led or Fine Gael-led government following the general election”.