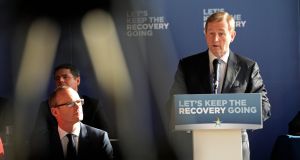 Taoiseach Enda Kenny with Minister for Agriculture Simon Coveney , at the launch of the Fine Gael Manifesto. Photograph: Eric Luke / The Irish Times

Mr Coveney was asked on Thursday morning about the concerted attacks by Fine Gael Ministers on the Fianna Fail leader.

He said it was the job of Fine Gael to correct the record when Mr Martin tries to mislead the electorate.

Mr Coveney said: “Micheál Martin is trying to create an impression that his time in health was a time of positive change and I think Leo (Varadkar) nailed that yesterday.

“This is about Fine Gael defending the work we have been doing over the last five years and actually also fighting for what we believe in based on the truth and based on a growing economy that can benefit everybody.”

Mr Coveney said Fine Gael has a “duty to expose” the promises by political parties.

He said Fianna Fail is “very exposed” claiming the party has no jobs plan or targets.

Minister for the Environment Alan Kelly said there was no concerted attack on Mr Martin.

He said: “There is a lot of robust exchanges across all parties. I don’t see that as an issue at all.

“I don’t see that as an issue at all, I believe that everyone is engaging and putting forward their policies and platforms, the Labour party is putting forward its platform and policies, the same as everyone else.

“We are also pointing out the inconsistencies with other parties and what they are saying.”

Mr Martin said the Government is engaged in personal attacks on him and claimed this was an “illustration of the panic and disarray within Government circles”.

He said: “This is a general election campaign and we are perfectly entitled to comment on the record of other parties.”