Shane Ross: The unhappy outsider running out of time

From Stepaside station to judicial appointments, Minister is not getting his way 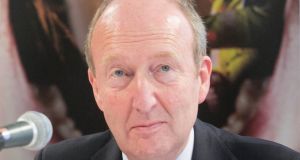 Shane Ross: He has continued to be an outsider. It has not made for a happy or productive experience in Government. Photograph: Gareth Chaney Collins

Another week, another row in Government over an issue that has become a running sore for the entire lifetime of the administration: the appointment of a judge.

Differences flared between the Independent Alliance and Fine Gael before the Cabinet meeting on Tuesday, as Shane Ross objected to an agenda item which proposed the nomination of Judge George Bermingham as President of the Court of Appeal, one of the three most senior judicial offices in the State.

1 Miriam Lord: Reluctant Halligan bangs the nail on the head
2 All students will not return to school even if social distancing rules are relaxed – McHugh
3 We need to pay very close attention to what is happening in Britain now
4 Trump says, ‘I have the best words.’ Now this comedian’s going viral for lip-syncing them
5 Dangerous student stalker sentenced to seven years in jail
6 What do you do when you meet a bear on a walk? Copy this 12-year-old
7 Miriam Lord: Taoiseach is trapped in a Zoom session from hell
8 Trump announces clampdown on social media companies
9 The human cost of Covid-19: Ireland's care homes with the most deaths revealed
10 Emily Maitlis thanks BBC viewers for support after Cummings row
11 Maria Bailey takes action against newspaper over ‘swing gate’ coverage
12 Coronavirus: Further nine deaths reported along with 46 new cases
13 Charlie Chawke plans 290 apartments and hotel on Goat pub site
14 Starmer hits home with measured attacks on Tory pandemic record
15 What exactly will happen in phase two of easing restrictions?
16 Man jailed after using stolen credit card for stay at two five-star Dublin hotels
17 Brazilian gang held in Offaly had sub-machine gun and student visas
18 Church closes its doors after flouting public health rules
19 The momentum behind calls to ease lockdown may become irresistible for politicians
20 New rules for arrivals to Ireland start today - what is changing?
21 Airport arrivals on quarantining: ‘Fourteen days for me is fine. There’s an end date’
22 Four things that could help Ireland escape from the Covid-19 recession
23 Today was hottest day of year so far with 26.8 degrees recorded in Roscommon
24 Tax and the Pandemic Unemployment Payment: Your questions answered
25 New HSE figures reveal the toll on care homes
26 Cyril Fitzsimons obituary: A larger-than-life character who became a New York institution
27 ‘It would be such a shame if Ireland were to lose its beautiful native tongue’
28 Row over ownership of Fota Island resort comes before High Court
29 Tempted by a weeknight barbecue? Here’s how the pros turbocharge their grilling
30 Bake-off: Matt Damon bids farewell to bakery as he prepares to leave Ireland
31 Young Irish women the most depressed and lonely in Europe
32 Revenue fears fraudsters tapped bank details of 3,000 taxpayers
33 Coronavirus: French look forward to ‘liberty’ with second stage of reopening
34 Live large (at a reduced price) in Malahide new build for €1.495m
35 Donald Trump has one last chance to ensure his re-election
36 Girl (5) flown to hospital after lilo drifted mile offshore
37 What will €180,000 buy in Dublin and Co Tipperary?
38 ‘Since coming out of lockdown I’ve been a mess, and I miss my children’
39 Philip Browne admits funding model for Irish rugby is not sustainable
40 ‘We loved each other’: Anthony Fauci recalls Larry Kramer, friend and nemesis
Real news has value SUBSCRIBE