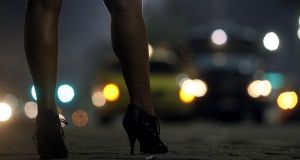 Legislation which criminalises the purchaser of sexual services rather than the seller has been passed in the Dáil by 94 votes to six.

There were three abstentions.

The Criminal Law (Sexual Offences) Bill also strengthens laws to combat child pornography and prevent the sexual grooming of children. And it amends provisions on incest and indecent exposure.

Provisions in the Bill also include prohibition of the wearing of wigs and gowns in proceedings involving children and the prohibition on the cross-examination of victims of sexual offences by an accused, which will apply once the Bill is commenced.

The Bill also provides for persons under 18 to give evidence from behind a screen, but Social Democrats TDs Róisín Shortall called on Tánaiste and Minister for Justice Frances Fitzgerald to accept the case by the Rape Crisis Network for this to apply to anybody, without an age limit.

“Given the trauma associated with sexual offences and the difficulties which victims often face in coming forward, it is important that the courts make it as easy as possible for victims to give evidence,” Ms Shortall said.

Ms Fitzgerald said however it was not appropriate to extend the provision to all adult witnesses and the EU victims’ directive did not think it appropriate either.

She said the issue would however be dealt with in the Criminal Justice (Victims of Crime) Bill and the issues Ms Shortall raised would be appropriately addressed in that legislation.

During a report stage debate on Tuesday night, the Tánaiste rejected an amendment by Ms Coppinger that the Minister for Justice report within six months of the commencement of the legislation, on measures to combat sexist and anti-LGBTQ attitudes.

These included public awareness campaigns on consent and on discouraging men from buying sex.

Ms Coppinger said classes on consent were in place at college level but not in secondary schools.

She also renewed her call for exit strategies for women caught up in prostitution including financial support, language supports because many migrant women had been trafficked into prostitution in Ireland.

The Dublin West TD said the reality was that without such supports, there would be no reduction in the number of vulnerable people involved in prostitution.

The amendment also targeted demand for prostitution because “our society prioritises the needs of men - 99 per cent of the purchasers of sex are male - and subordinates the needs and desires of women. LGBTQ people are involved in prostitution as well.”

But the Minister said Ms Coppinger wanted to use criminal law to pursue wider issues of equality and education. Ms Fitzgerald said the new offence of criminalising the purchase of sexual services was dealt with and an amendment had already been introduced to deal with a review of the legislation, within three years.

She pointed out that the Department of Justice ran awareness raising campaigns including a focus on domestic and sexual violence.

Ms Coppinger’s amendments were outside the provisions of the Bill, she said.

Sinn Féin justice spokesman Jonathan O’Brien raised concerns about the Tánaiste’s proposal on incest which would increase the penalty for a consenting female over 17 from the current three to seven years up to life imprisonment.

Mr O’Brien said he understood the Minister was trying to equate the offences for a man and for a woman but she had not demonstrated what public good would be served by increasing the sentence from three to seven years to life imprisonment. “We are not talking about sex which is not consensual. Let us be very clear on that,” Mr O’Brien said.

His amendment would mean a female over 17 would remain liable for a term of three to seven years.

But Ms Fitzgerald said she was trying to update the language and provisions of very old legislation. Her proposal “will bring the penalty for incest by a female into line with that of a male”.

The Minister said Mr O’Brien’s amendment “would have the effect of bringing the female to seven and leaving the male at life. That inequality would remain if we went along with the Deputy’s amendment.”

The Bill, which originated in the Seanad, now returns to the Upper House for consideration of amendments made in the Dáil.