The Oireachtas Public Accounts Committee found Garda management was given several opportunities to resolve issues at Templemore college but failed to do so. PAC also expressed ‘grave concerns’ regarding the Dept of Justice's oversight of the force. 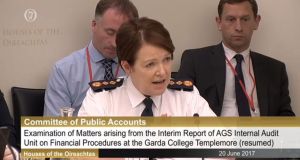 The Oireachtas Public Accounts Committee (PAC) has found Garda management was given several opportunities over the past decade to resolve issues at Templemore Garda college but failed to do so.

In a strongly critical report, the committee members found a significant number of senior personnel were aware of financial irregularities in the Garda training college over a significant period of time.

The report adds: “It is the opinion of the Committee that despite this, even where there were efforts to highlight issues, there was a systematic failure to take the necessary decisions to resolve the issues.”

The committee finds there was a practice within An Garda Síochána (AGS) of neither sharing pertinent information with the internal audit team, nor with the Department of Justice and Equality or the Comptroller and Auditor General.

This is a failure of corporate governance, the report adds.

The report by the PAC following of weeks of hearings on the issue by the committee.

The members found there was a persistent reluctance by senior management to inform the necessary oversight bodies.

In terms of the disputes between senior members of the force, the committee says there is a notable absence of a sense of common purpose between members of senior management.

“This disagreement appears to the Committee to be between (i) those who wish to preserve the status quo and for whom protection of reputation, including that of AGS and the college, is the principal concern, and (ii) those who wish to implement what they consider to be the necessary reforms even if this involves reputational risk.”

The report stresses two senior members of management had their reporting structures changed when trying to raise issues of irregularities at Templemore.

It says the Garda Commissioner must put in place a system which ensures all employees feel free to raise issues of such importance without risk or perceived risk of penalty.

The members say the Templemore issue has shown there is a culture within the force of withholding information, providing inadequate information and keeping issues internal to avoid external scrutiny.

Regarding the Department of Justice, the committee says it has grave concerns regarding the level of departmental oversight of the force.

It states the department allowed such significant financial and governance issues to develop in the Garda college.