Sean Barrett to speak with Michéal Martin over row 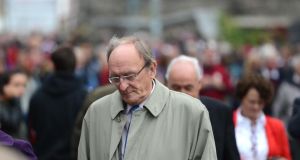 Ceann Comhairle Sean Barrett is expected to speak to Fianna Fáil leader Michéal Martin by telephone this evening in an effort to resolve his row with the Opposition.

In a statement earlier today, Mr Barrett said the Opposition are entitled to question his decisions but he stood by his ruling last week not to allow a debate on the establishment of a inquiry into Garda malpractices.

However, the statement did not go far enough for many in Fianna Fáil, with TDs calling on him to withdraw his claim that the Opposition are attempting to undermine him.

Clare deputy Timmy Dooley said the Opposition are always entitled to question any decision by the Ceann Comhairle but claimed the issue was Mr Barrett questioned their motivation for doing so.

In his statement, Mr Barrett said he may have given the impression in the RTÉ interview last week that the “Opposition were not entitled to question my decision”.

In the interview, Mr Barrett suggested Fianna Fáil and Sinn Féin were attempting to undermine him. Mr Martin called on the Ceann Comhairle to withdraw the statement if he was to retain the confidence of Fianna Fáil.

“In relation to my interview with RTÉ on Friday last, perhaps in the heat of the moment during that interview I may have given the impression that the opposition were not entitled to question my decision as to why a debate was not allowed,” Mr Barrett said.

“Of course I accept that they are entitled to question my decision. However, I will state that I made the decision after careful consideration in the best interest of the Oireachtas and the taxpayer.”

Senior Ministers have expressed their confidence in Mr Barrett, who faces the prospect of a motion of no confidence moved by Fianna Fáil.

Minister for Finance Michael Noonan has said the Ceann Comhairle has been a fair and unbiased chairman of the Dáil who has ruled without “fear or favour”, and he hopes the disagreement between him and the Opposition can be resolved during the course of the week.

Speaking in Limerick, Mr Noonan would not comment on whether or not the Ceann Comhairle would be forced to give an apology to the opposition to avoid a no confidence motion in him.

“Well it’s not for me to say anything like that. I don’t know the full circumstances of this, but I know he has been a fair unbiased Ceann Comhairle and on this occasion he has acted in accordance with the legal advice he has received, but he cannot seek political advice from either side.”

“I don’t know how it will work out. I think Sean Barrett has been a very good Ceann Comhairle. He has ruled without fear or favour and I hope that the disagreement between himself and the opposition can be resolved as the week goes by,” he added.

Mr Noonan said the Ceann Comhairle was advised the best course of action was to proceed on the Guerin advised inquiry and its terms of reference without a Dáil debate, and he was fully entitled to do that in accordance with the independence of his office.

“The Ceann Comhairle is independent his job is to interpret standing orders in the Dáil and he can’t take political advice either side so he took legal advice from his officials and he was advised legally that the best course of action was to proceed without debate and he has done that and he’s fully entitled to that in accordance with his office and the independence of that office.”

He said the Government accepted the terms advised by the Guerin report and set up an inquiry to look into the full scope of these matters.

Minister for Agriculture Simon Coveney also expressed his confidence in Mr Barrett. “I don’t think TDs should be telling the Ceann Comhairle how to do his job. He’s someone who’s very experienced and he has got his own counsel and advice on these issues and I think it’s up to the Ceann Comhairle to make any decisions that he needs to make this week and I’m certainly not going to tell him how to do his job.”

Speaking the same event in Nenagh, Minister for the Environment Alan Kelly said he supports the Mr Barrett.

“I support the Ceann Comhairle. It’s a very difficult job. It’s a very difficult decision and he obviously had to take advice but I do think possibly through the CCP (committee on procedure and privileges) inside in Dáil Éireann there is a role there whereby we can get into the detail of this and if standing orders need to be changed into the future well then so be it, let’s change them.

“But ultimately we need to ensure that, at all times, that the parliament of the land, which is elected democratically by the people...can talk and discuss any issue that it feels necessary.

“Whatever we need to do to ensure that it happens into the future needs to be done.”

Earlier, Minister for Health Leo Varadkar said he did not think Mr Barrett should withdraw his claim that Fianna Fáil tried to undermine him in the controversy over his ruling a debate out of order.

“I think Sean Barrett is doing an excellent job and is very fair to both the Government and the Opposition,’’ he said.

He said he did not know what the implications of an Opposition motion of no confidence in Mr Barrett would be, if it went ahead. Mr Varadkar said he had heard a radio interview earlier with Sinn Féin deputy leader Mary Lou McDonald, and “she didn’t indicate that is where they are going at all’’.

The Minister was speaking to journalists on Monday at the launch in Dublin of a cancer control strategy launched by the National Cancer Control Programme.