Seán Gallagher ‘very proud’ of his time in Fianna Fáil 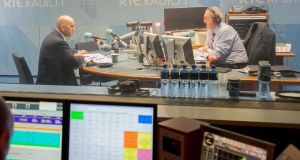 Presidential candidate Seán Gallagher has said he is “very proud” of his time in Fianna Fáil and denied he had tried to hide his involvement with the party.

He was asked on the RTÉ Radio One’s Today with Sean O’Rourke programme if he believed he should have been more open about his background in Fianna Fáil when he ran for the presidency in 2011.

“I’m very proud of my time in Fianna Fáil, I joined Fianna Fáil when I was 21,” Mr Gallagher said.

After that he said he became a professional youth worker and then wrote the then government’s first national alcohol education programme for young people. “From there [I]became political adviser to the then minister for health Dr Rory O’Hanlon,” he said.

Asked about ‘tweetgate’, the moment on the RTÉ Frontline programme centred on the use of a tweet which claimed falsely to come from an official Twitter account of Martin McGuinness, the late Sinn Féin politician who was also running for the presidency, Mr Gallagher said: “I’ve shaken hands with RTÉ, we’ve put it behind us”.

The tweet said a man who claimed to have given a cheque to Mr Gallagher for a Fianna Fáil fundraiser would be presented at a press conference the following day.

The incident RTÉ Frontline programme was regarded as a turning point in the campaign. Mr Gallagher subsequently lost a commanding lead in the polls and then the election.

Asked if his response to the tweet during the debate in 2011 cost him the election, Mr Gallagher responded: “I would leave that to much more experienced and wiser commentators, but there were lessons to be learned for me. It wasn’t my greatest performance in the end and there were lessons also for RTÉ.”

After the election he took a case against RTÉ which, after six years, saw him win an apology and damages.

“I accepted RTÉ’s apology, we had the fight for the six years and I’m happy that’s done”.

He also clarified recent comments he made in which he appeared to compare his legal battle with RTÉ to the experience some victims of clerical abuse suffered at the hands of the Catholic Church.

“The point I was trying to make, I wouldn’t compare my situation, anyone sitting at home who has ever taken on a ‘David and Goliath’ fight against an institution, the only point I was making is that big institutions do what they do, they lock down, double down, become defensive and ultimately, eventually will put their hands up.

“If they would put their hands up early then it would save everybody time, money and resources, eventually just accept it. Sometimes by being defensive you further compound the very issue that set it all in train, that was the point I was making.”

He also denied he had any part in recent leaks to newspapers relating to ‘tweetgate’, saying as far as he was concerned, he had moved on. He added he “saluted” the person he described as a whistleblower. “My focus now is not on 2011, it’s on 2018.”

Asked about his low public profile during the seven years since the last presidential election in 2011, Mr Gallagher said it had taken him around 18 months to recover from the campaign.

“It was not because of losing the election. The first challenge was because I had stepped away from my businesses, I was starting again, that took some time. I had two children, that changes perspective,” he said.

“I started a new business, continued to do what I committed to do, what I had outlined in 2011, in terms of my commitment to jobs, to SMEs, to trying to help inspire the next generation of business leaders.”

When asked about DUP leader Arlene Foster’s contention that the Belfast Agreement could be changed to accommodate a final Brexit deal, Mr Gallagher said the Brexit discussions were at a sensitive stage.

He said it was important that all six candidates in the presidential race to be careful with their comments.

Instead of commenting on Ms Fosters view, Mr Gallagher said there should be a return to the work commenced by former president Mary McAleese and her husband Martin in establishing cross-community contacts, relationships and trust.