Ceann Comhairle seeking to strengthen relations between parliaments after Brexit 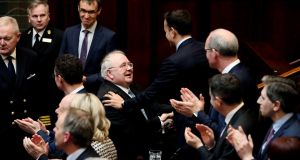 Ceann Comhairle Seán Ó Fearghaíl is to write to the speakers of the Northern Assembly and the House of Commons for an urgent meeting about strengthening relations in the wake of Brexit.

Mr Ó Fearghaíl was speaking following his re-election by 130 votes to 28 for challenger, former minister and Independent TD Denis Naughten on the first day of the 33rd Dáil. There were two abstentions.

He paid tribute to Mr Naughten, describing the Roscommon TD as a “parliamentarian of very considerable standing”.

Mr Ó Fearghaíl said he wanted to have a meeting with fellow speakers, Alex Maskey in Stormont and Lindsay Hoyle in Westminster, as urgently as possible to see how on the island “we can strengthen inter-party relations and how the east-west relations between our parliaments can be strengthened as they must undoubtedly in the aftermath of Brexit”.

The House also agreed to his request to re-establish the all-party business committee.

Mr Ó Fearghaíl told TDs that they were in a challenging period but the Dáil had shown “we can be very decisive indeed when we put our minds to it”.

“Let us be decisive in the period ahead and let us decide to work together in the interests of the people who sent us here,” he continued.

He said they had to work together carefully, intelligently, and as urgently as possible because “the problems that remain to be confronted are substantial”.

Mr Naughten said: “I understand every perspective in this House because I have lived it”, both in government and in opposition.

He hit out at the HSE which used to hold quarterly meetings with TDs but now the sole means of accountability, he said, was through the health committee and it sometimes took 10 weeks to reply to parliamentary questions.