Signal sent on gay rights will be ‘heard loudly across the living world’, says Taoiseach 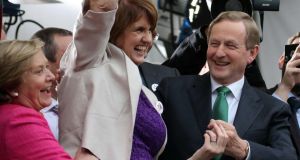 Taoiseach Enda Kenny has hailed the passing of the Same-sex Marriage Referendum as a “sound of pioneering leadership” from Ireland to the rest of the world.

Mr Kenny said the signal sent out on gay rights from Ireland - the first country to introduce same-sex marriage by way of popular vote - will be “heard loudly across the living world”.

He said the “past 24 hours were almost like a vigil at the end of a long journey” for many gay people and their families to see if the country had voted Yes.

Mr Kenny was speaking at a press conference with Tánaiste Joan Burton following the official declaration that the vote had been carried, with 62 per cent support.

“Would their fragile and deeply personal hopes be realised? Would a majority of people, in this our Republic stand with them and stand up for them so they can live in our shelter and not in our shadow?

“That having come out to us that we could now come out for them and do it with a single word, with a solitary syllable: Yes, marked with an X.

“That Yes is heard loudly across the living world as a sound of pioneering leadership from our people, and hopefully it will also be a sound across the generations of gay men and women born, as we say, before our time who took their secrets when they moved on.”

Mr Kenny asked the thousands of young people who voted for the first time in the referendum to maintain their interest in the political sphere “because your country needs that participation in our democratic process”.

“I want to thank all of the organisations involved who ran such a committed campaign for a Yes vote. In the privacy of the ballot box, the people made a public statement.

“With today’s vote, we have disclosed who were are: a generous, compassionate, bold and joyful people.

“Yes to inclusion, Yes to generosity, Yes to love, Yes to equal marriage.

“For a significant proportion of people who voted against the amendment, it was because of genuinely held views which are to be respected.

“This decision makes every citizen equal, and I believe it will strengthen the institution of marriage for all existing and for all future marriages.

“All people now have an equal future to look forward to.”

Ms Burton said Ireland, known as a nation of storytellers, has “told quite some story” with its Yes vote, which she described as a “magical, moving moment”.

“Our people have spoken powerfully and profoundly. Together, we’ve chosen to make progress. We’ve chosen to create a more compassionate and egalitarian Constitution. We’ve said Yes to equality, and Yes to love.”

She said she is “immensely proud” of the role the Labour Party “played in securing this referendum and helping to win it”.

“But in this profoundly uplifting campaign, we were just one part of a much wider movement. A rainbow movement to help create a rainbow nation.”

She singled out the Yes Equality group for praise and claimed her predecessor, Eamon Gilmore, put same-sex marriage “front and centre...and without whom, today would not have happened”.

“From so many countries and by every means of travel, streams of people came home to vote. Hate and prejudice could never have moved so many to travel so far - only love and fellowship could possibly have done that.”

She said Irish people have “struck a massive blow against discrimination as we extend the right of marriage to all our citizens”.

“We’ve done something incredible and proven that a compassionate, well-informed electorate can and will extend civil rights when asked in a popular ballot. Now I hope that spirit, that torch, is carried abroad.

“We’re the latest country to pass marriage equality into law – but we will certainly not be the last.

“We’re still just at the beginning of a great global movement for LGBT equality.

And in many countries, persecution of gay and lesbian citizens is still a tragic reality.

“So today is simply a staging post – here and elsewhere - but a profoundly important one.”