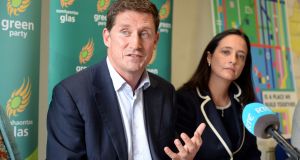 Green Party leader Eamon Ryan has not ruled out his party seeking the position of tánaiste in a coalition with Fianna Fáil and Fine Gael.

Mr Ryan said he had no interest in being taoiseach as part of an arrangement to rotate the top position, but did not rule out a stint as tánaiste.

Fianna Fáil leader Micheál Martin is expected to be taoiseach in the first half of a coalition government with Fine Gael and the Greens, with Fine Gael’s Leo Varadkar going second.

Senior Green sources had previously floated the idea of Mr Ryan also getting a year as taoiseach, although Mr Ryan ruled this out on Today with Sarah McInerney on RTÉ Radio One.

It had also been assumed that Mr Varadkar and Mr Martin would alternate the position of tánaiste. A Fianna Fáil source reacted coolly to the idea of a Green tánaiste, and pointed out that the party only has 12 seats. Fianna Fáil has 37 and Fine Gael 35.

Mr Ryan repeatedly said positions within the potential government have not yet been discussed and are usually a matter for party leaders. The priority now, he said, is working in policies and getting the country through the Covid-19 crisis.

“We should be fixating on delivering change,” he said.

Green Party deputy leader Catherine Martin, who is leading the Green Party team in government negotiations, last week said she is giving serious consideration to challenging Mr Ryan for the position of leader after being urged to do so by a number of party members and councillors, but said government talks must come first.

“That’s how we do things, last week Catherine said she was focused on the talks for government formation. That’s the first task,” Mr Ryan said.