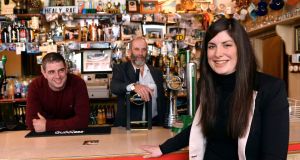 Maura Healy-Rae will be co-opted to take the council seat of her father Danny, centre, and join her brother Johnny, left, on Kerry County Council. Photograph: Don MacMonagle.

Dozens of vacancies in local authorities created by the election of councillors to the 32nd Dáil are to be filled this week. The new councillors will be eligible to vote in the Seanad elections.

An estimated 47 vacancies have been created by the general election due to the prohibition on politicians holding two offices.

Fianna Fáil has the largest number of seats to replace at 22, followed by Sinn Féin (10), Fine Gael (seven) , and about 10 between the Independents and Anti-Austerity Alliance-People Before Profit.

There is a compulsory period of 14 days before any replacement can be approved, which means replacements can begin today. This leaves just five days for councillors to be ratified before the closing day for the electoral registrar for the Seanad elections on Friday.

Dún Laoghaire-Rathdown County Council will be one of the first to approve a group of new councillors, who will replace those elected as TDs, on Monday night.

Fine Gael has nominated Jim Gildea to replace new TD Maria Bailey, a councillor with the local authority since 2004.

Mr Gildea, who retired two years ago from his job as an IT manager at Topaz, ran as a candidate in the last local elections but was not elected.

Party colleague Josepha Madigan’s seat is set to be filled by John Kennedy, who ran in previous local and Seanad elections.

Although Fianna Fáil had the highest number of sitting councillors nationally elected to Leinster House, it did not have any successful candidates in the Dún Laoghaire-Dublin Rathdown constituencies.

South Dublin County Council will also approve co-opted councillors at its meeting today. Tom O’Neill, the council’s meeting administrator, said there were four vacancies that may be filled at the meeting.

Fianna Fáil has nominated Emma Murphy, who works in the NGO sector and ran in the 2014 local elections but did not win a seat, to replace the former South Dublin County councillor John Lahart.

Fine Gael’s Colm Brophy who won a seat, is set to be replaced by Brian Lawlor, who was elected as a councillor in Tallaght South in 2009.

Mr Lawlor ran for the local election in the Templeogue-Terenure area in 2014 but failed to win a seat.

Sinn Féin’s Eoin Ó Broin said the person to take his place would be announced today. The party has not confirmed when it will nominate replacements for its other seats.

Gino Kenny of the AAA-PBP said a decision would be made in the next few weeks on who they would put forward as his replacement.

Dublin City Council has six vacancies to fill including Fine Gael’s Noel Rock’s, whose seat is set to be taken by Norma Sammon. Mr Rock said Ms Sammon, a barrister originally from Drumcondra, would be a great advocate for the area.

The vacant seat from Fianna Fáil’s Sean Haughey, the son of former taoiseach Charlie Haughey, has attracted more than five nominations to replace him.

There is only one council seat left vacant from the general election in Co Tipperary – that of Fianna Fáil’s Jackie Cahill.

Sean Ryan, a 39-year-old teacher at Rockwell College in Cashel, has been nominated to replace Mr Cahill. Mr Ryan said it was “third time lucky” for him to become a councillor after running unsuccessfully for co-option in 2006 and for local election in 2009.

Cork has had a large number of councillors elected as TDs with seven to be replaced, including three Fianna Fáil, two Sinn Féin, one Independent and one AAA.

Gobnait Moynihan will be nominated to replace her brother, Fianna Fáil’s Aindrias Moynihan.

Ms Moynihan is a social worker who was involved in election campaigns in the past.

There is speculation Fianna Fáil’s Kevin O’Keeffe’s seat would be passed on to a family member, although this has not been confirmed.

AAA-PBP’s Mick Barry said his replacement was likely to be endorsed by the end of the month.

Ms Healy-Rae, a teacher, looks likely to take a seat beside her brother Johnny who was co-opted after his uncle Michael’s election to Leinster House in 2011.

Mr Moran said Ms McManus had worked with him for 17 years and did not come from a political family. “She’s worked really hard for this and is very capable,” he said.

Galway East Independent TD Sean Canney has nominated Billy Connelly from Tuam as his replacement. Mr Connelly was his director of elections and chairman of the Caherlistrane/Kilcoona community council.

1 US election: ‘Trump would not be caught dead here unless he wanted our votes’
2 The real Contagion virus is out there and it’s causing virologists to worry
3 First full moon on Halloween night since 1955 will be rare ‘blue moon’
4 Five nursing homes receiving ‘intensive’ State support as they battle serious coronavirus outbreaks
5 ‘Clothes are not essential’: Damien English defends retail restrictions
Real news has value SUBSCRIBE