One debate would involve seven leaders in front of an audience, the other four leaders 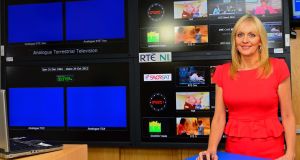 Miriam O’Callaghan is the proposed chair for the second televised debate, which is planned for the RTÉ studios without an audience. Photograph: Eric Luke.

RTÉ has proposed two live televised leaders’ debates during the general election – one involving seven parties, the other confined to the four big parties.

Sources at the national broadcaster have confirmed it will seek two distinct debates, one involving a new format for a general election.

That would be a seven-leader debate at University Concert Hall in Limerick, to be held seven to 12 days after an election is called. It would be shot in front of a live audience.

The host of the proposed Limerick debate will be Claire Byrne, who has shown herself adept at handling large audiences and panels from her own live RTÉ show on Monday nights.

The second debate would take place a week before polling day and would follow a more conventional format.

Prime Time anchor Miriam O’Callaghan is the proposed chair of the debate, which is planned for the RTÉ studios without an audience.

The live debate in Limerick would also include the leaders of the three new parties that have been formed since the last election: Renua Ireland, the Anti-Austerity Alliance-People Before Profit alliance; and the Social Democrats.

The latter two have no identifiable leader and would have to select a “leader” for the purposes of the debate.

The audience would be selected by a polling company and would be representative of the general population in terms of age, sex, geography and social class. The leaders would field questions from the audience.

RTÉ has broadcast election debates in front of audiences before and the presidential debate in 2011 on Frontline involved all seven candidates.