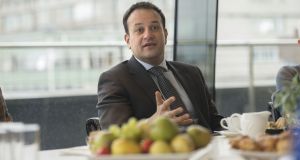 The exclusion of special needs issues as a topic on the RTÉ2 programme led Twitter users to tweet with the hashtag #CherishingAllChildren.

Under the hashtag, users stated the issues they face as parents of children with special needs. and the waiting lists their children face for vital services.

Carly Bailey said she was set to appear in the show to ask a question about waiting lists for children with special needs for services such as psychology, speech and language therapy and occupational therapy.

She wrote on Facebook on Saturday: “Today I received a communication from RTÉ to say that they will now NOT be covering special needs on the programme.

“I also discovered that the Minister for Health, Leo Varadkar, is due to be part of the panel. And that several other people also due to ask questions related to waiting times and other health issues have been uninvited.

“Tomorrow night RTÉ2 and Facebook co-host an election special with politicians from across the spectrum and an invited audience who submitted a question they would like the candidates to answer.

“I was invited to be part of the audience to ask my question, which related to children with special needs and how [politicians] intend to make things better, specifically outlining how austerity cuts have created huge waiting times to see therapists, how government have made it more difficult to claim payments we are eligible for that could help pay for services and how these children are not automatically entitled to a medical card.”

Two women who are parents of children with scoliosis also claimed they were uninvited from the programme at a late stage.

A spokeswoman for RTÉ said it did not uninvite any audience members from the RTÉ2 Facebook Election Special.

“In the lead-up to the broadcast RTÉ2 asked the public to submit questions they would like to put to politicians during the programme.

“We received hundreds of questions and based on these we selected topics that generated the biggest volume in order to represent the majority of contributors.

“Some individuals who contacted RTÉ’s production team to apply to be in the audience and ask questions were advised that their particular topic was not among the final topics which the team hoped to cover within the limited time of the live broadcast, but they were still welcome to be part of the audience,” the spokeswoman said.

The format of the debate saw political representatives dotted amongst members of the audience.

While each of the seven panellists offered different viewpoints on the issues, there were none of the clashes and interruptions that have characterised the two leaders’ debates so far.

The discussion centred on issues such as mental health, education, repealing the Eighth Amendment, jobs and unemployment.