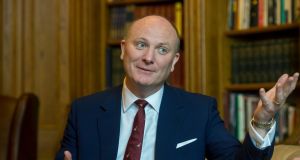 Statement issued through Declan Ganley’s solicitors said he is delighted with the result and today’s formal apology. Photograph: Brenda Fitzsimons / THE IRISH TIMES

RTÉ has apologised at the High Court to businessman Declan Ganley who had sued the broadcaster over a Prime Time special programme broadcast almost 12 years ago.

The Galway based businessman sued RTÉ over the programme, aired on November 27th, 2008, claiming it had gravely damaged his reputation and character, causing him distress and embarrassment.

He had sought damages, including aggravated and exemplary damages.

When the matter came before Mr Justice Bernard Barton at the High Court on Thursday, Declan Doyle SC, for Mr Ganley, said the matter had settled.

Counsel said, as part of the settlement, RTÉ had apologised to Mr Ganley.

In its apology, read by Paul O’Higgins SC, for the broadcaster, RTÉ said that in November 2008 it had “broadcast a Prime Time special programme concerning Mr Ganley.

“In the course of the programme reference was made to the death of Kosta Tribecka, and an image was shown of his body.”

“RTÉ accepts unreservedly as stated on the programme that the death of Mr Tribecka was wholly unrelated to Mr Ganley or any business related to him.”

“RTÉ apologies to Mr Ganley for any hurt or distress that may have been caused.” the apology concluded.

No other details of the settlement were aired in open court.

The judge, on consent of the parties, struck out the proceedings and vacated all previous orders, including pretrial orders, granted by the courts.

Mr Ganley was not in court for the apology, but did observe the proceedings via video link.

A statement issued through Mr Ganley’s solicitors, Johnsons, said the businessman “is very satisfied with the apology received from RTÉ, together with the financial agreement reached.”

“Our client regrets that he had to initiate these defamation proceedings arising from RTÉ’s Prime Time broadcast on November 27th 2008 in order to vindicate his reputation and had to prosecute the claim to this stage before reaching settlement.”

“However, our client is delighted with the result and today’s formal apology.” the statement concluded.

Following the settlement, RTÉ issued a statement, saying: “RTÉ stands over the journalism of the programme ‘Citizen Ganley’ and is happy to agree to clarify one aspect of the programme as highlighted in the statement read in court. We are glad that after a decade of legal argument, a mutually beneficial agreement has now been reached on the matter.”