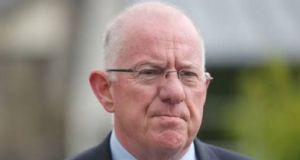 Charlie Flanagan: insisted the Government was still committed to passing the judicial appointments legislation by the summer

Minister for Transport Shane Ross approached Sinn Féin last week to express support for the party’s initiative on a system of sentencing guidelines for judges.

Sinn Féin has made progress on the introduction of such a system a requirement for its support for the Judicial Appointments Bill, championed by Mr Ross.

However, the Minister for Justice Charlie Flanagan said on Sunday that any sentencing guidelines would not be part of the Judicial Appointments Bill, but could be introduced as part of another piece of legislation, the Judicial Council Bill.

The Attorney General is currently examining a Sinn Féin proposal on the issue, though any legislative proposal is not likely in the near future.

Sinn Féin, however, says it wants to see progress on the sentencing guidelines before it supports the Judicial Appointments Bill in the Dáil.

Mr Ross has been the principal promoter of new legislation on judicial appointments which has been slowly progressing through the Oireachtas since last year. Because Fianna Fáil opposes the Bill, the Government is reliant on Sinn Féin support to pass it through the Dáil.

Government sources said that Mr Ross had assured them of Sinn Féin support for the Bill, which now appeared to be in doubt.

However, Mr Flanagan pledged on Sunday that the Judicial Appointments Bill would be passed during the lifetime of this Dáil despite rising scepticism in Leinster House that the Bill will ever become law.

Mr Flanagan also distanced himself from the original proposals, and again strongly defended the judiciary, whose appointment procedures have been fiercely criticised by Mr Ross.

“The Bill has been changed entirely from its original format,” Mr Flanagan told RTÉ’s The Week in Politics, adding that he expected to see the Bill “back in the Dáil in the next two weeks”.

Political sources said it had been originally planned to be debated by the Dáil this week – when a series of amendments will be put to votes – but that it was taken off the order paper.

The Cabinet recently approved 50 amendments to the Bill to be introduced when it returns to the Dáil after it was already heavily amended at Committee Stage. However, it is not clear if there is a Dáil majority to pass the Government amendments.

Mr Flanagan, who has privately sought to soothe judicial outrage at some of Mr Ross’s comments about the appointments of judges, said: “The people of this country have always had a huge confidence in the judiciary and its independence.”

Mr Ross has frequently criticised the system of appointments for judges as being tainted by “cronyism” and by politicians appointing “their friends” to the bench.

Speaking to The Irish Times, Mr Flanagan said the Bill had “had its difficulties, and still has challenges”. He was a “realist”, he said, but insisted that the Government was still committed to passing the legislation by the summer.

Dr Maura Adshead, professor of politics in the University of Limerick, said on Sunday the Bill was “clearly a flawed piece of legislation...I think it needs to go back to the drawing board”.

“Fine Gael is not looking like a very principled party anymore,” Prof Adshead said, “allowing something to go through like this just to hold the Government together...I understand they have made a commitment, but there has to be a point where they have discharged their duty.”

Dublin house deaths: woman still being treated in hospital 11:39
Seamus Mallon tributes: Sharon Stone among those to sign book of condolence 11:09
Man in his 40s dies in apartment fire in Cavan 09:16
Man (33) dies following suspected stabbing in Co Wexford 08:47
Funeral of Seamus Mallon to be held in Co Armagh on Monday 20:54
SUBSCRIBER ONLY