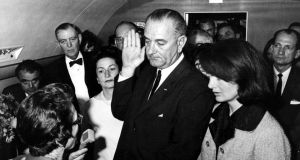 Lyndon Johnson being sworn in on Air Force One after John F Kennedy’s assassination. Johnson was the one who delivered more, but Kennedy still gets the credit.

Lost leaders have a persistent fascination. The reputations of great men cut down in their prime are often more enduring than those who lived to make a real impact on their country’s fortunes.

Partly it is because the lost leaders have not had to govern for long, if at all, and so don’t get sucked into the messy compromises that are the inevitable fate of long-serving politicians entrusted with the thankless task of government.

Another factor is that tragic or early death often obscures the very real faults and failures of the departed leader.

This year’s Parnell Summer School at the chief’s ancestral home at Avondale in Co Wicklow picks up on the theme to coincide with the 50th anniversary of the visit to Ireland of US president John F Kennedy.

Parnell and Kennedy are prime examples of lost leaders who have fascinated successive generations of their countrymen and women. Their posthumous reputations put those of most of their more long-lived contemporaries in the shade.

Parnell was canonised as the “uncrowned king of Ireland” and immortalised by two of the country’s greatest writers, Yeats and Joyce, so that his name now lives in world literature.

In terms of achievement Parnell built a disciplined Irish Party in the House of Commons and ruled it with a rod of iron. His political agitation helped Michael Davitt and the Land League deliver a settlement that gave the tenant farmers of Ireland the ownership of the land and transformed the country.

His aloof and imperious manner added to his mystique but it also had its downsides. He made a private deal with the imperialist Cecil Rhodes to insert a section in the Second Home Rule Bill that would ensure that a number of Irish MPs would still attend the parliament in Westminster. For this Parnell was given a political donation of £10,000, a vast sum in 1888.

Because of Parnell’s early death at the age of 45 and the romance of his relationship with Katherine O’Shea his faults have been overlooked, at least in the popular version of history.

The same is true of President Kennedy. Half a century after his death the abiding image is one of youthful idealism and glamour. It has a particular resonance in Ireland because of his ancestry and the visit in June 1963, which marked a watershed between the modern outward-looking country we have today and the narrow, self-absorbed State of earlier decades.

Kennedy’s personal and political flaws are widely acknowledged but the romance and flair he brought to the White House lives on. Lyndon Johnson may have been the president who delivered on civil rights and “the Great Society” but Kennedy is the one who gets most of the credit. The other side of the coin is that Kennedy set the United States on course for the disaster of Vietnam but Johnson is the one who gets the blame. Such is the way with lost leaders.

The examples of that abound. Michael Collins was cut down at Béal na Bláth two months before his 32nd birthday but as we come up to the 100th anniversary of that untimely death his reputation is probably higher than ever.

The fact that “the Big Fellow” ran a ruthless assassination campaign targeted mainly at fellow Irish men in the police force is conveniently glossed over. He is now a hero for all seasons.

Fine Gael claim him as a founding father who provides an antidote to the dreariness of Éamon de Valera, while republicans applaud his covert support for the IRA in the North in the months after the treaty. How Collins would have turned out as a political leader is anybody’s guess, but that is the point about lost leaders.

The leaders of the 1916 fit into the same category. Up to the 50th anniversary of the Rising in 1966 they were held up as the paragons of republican virtue, in contrast to the baseness of successive generations of politicians.

Never corrupted by power
The outbreak of the Troubles in 1969 and the decades of murder that followed led to a reassessment and the 75th anniversary was marked in a very different spirit. Nonetheless, they remain icons for many people, precisely because they were never corrupted by power.

By contrast the politicians who have run the State in the 90 years since independence have nothing like the same standing in the public mind. WT Cosgrave, who ensured democracy survived the civil war, de Valera, who was easily the most successful political figure in modern Irish history, or even Seán Lemass, who created the conditions for the prosperous modern Ireland we live in today, have nothing like the same appeal as the lost leaders.

The Parnell Summer School on the theme of Parnell & Kennedy: Lost Leaders will open on Sunday, August 11th, and conclude on Friday, August 16th.
parnellsociety.com